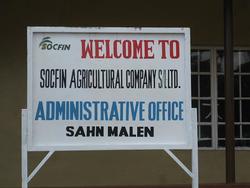 Recent reports have shed light on land rights violations and other abuses allegedly committed by SOCFIN oil palm and rubber plantations against local communities in Africa. Despite commitments made by the firm to change its behaviour, the reports reveal that communities affected by SOCFIN agricultural activities continue to face an uphill battle to have their land and human rights respected. SOCFIN and one of its two major shareholders, the Bolloré Group, have been accused of making repeated use of courts to intimidate those who speak out against their practices.

The Bolloré Group is run by Vincent Bolloré, one of France’s richest and best known businessmen. The group’s businesses include shipping, advertising, construction and media.

In April 2018 Vincent Bolloré was briefly arrested and indicted by a judge in France for corruption. Bolloré, who denies any wrongdoing, is facing accusations that one of his companies undercharged for work on behalf of presidential candidates in Guinea and Togo in return for port contracts. He could face up to 10 years in prison if convicted.

Bread for All, a Swiss-based development organisation, has recently published a report highlighting a number of rights violations committed by SOCFIN subsidiaries in Liberia.

The report emphasises that several of the communities affected by SRC and LAC hold customary land rights to their ancestral lands. However, the plantations have often not respected these rights.

Residents of the Garjay, Lanco and Tartee communities in the SRC concession area have reported intimidation by plantation workers and said they were forced to abandon their villages after bulldozers destroyed their crops.

“Since the destruction of our town in 2010, we can’t send our children to school. We are farmers without land to farm,” a farmer from Garjay has told Bread for All.

The towns of Jorkporlorsue, Gorbor and Ansa have reportedly been so encroached by the plantations that residents have been left with hardly any land for their farming.

Other problems and violations abound, including contamination of local water sources, sexual violence against women perpetrated by plantation guards and contractor heads, and threats and arbitrary arrests against those who have voiced opposition to SOCFIN’s activities in the country.

In another scathing report, FIAN, an international food rights organisation, has highlighted the conflicts arising from an oil palm concession controlled by the company in Sierra Leone. SOCFIN controls 18,000 hectares of oil palm concessions in the Malen Chiefdom, Southern Province.

The company’s practices have resulted in conflicts with local villagers. Community members have reported threats and intimidations to force them to sign over their lands, as well as corruption and lack of transparency in the concession process.

According to the report, opposition to the land lease agreement has been criminalised with arbitrary detentions and judicial harassment of community members who have voiced opposition. As recently as January, police repression of protests led to the death of two people (members of an association defending the rights of affected communities were arrested in connection with the two deaths, sparking allegations of criminalisation by rights groups).

The report also points to a destruction of small landowners’ livelihoods. “Communities have lost their access to farmland, preventing them from growing their own food and other cash crops,” the authors say.

In 2011 community members were promised long-term employment opportunities, health and education investments in their villages, out-grower schemes and sufficient land for their crops. FIAN reports a “major gap” between the promises made and the conditions on the ground. Employment has been hard to come by and the villages have only seen a fraction of the investments pledged, while plantation encroachment has not left enough space for community farming.

Women who have protested for their communities’ rights have reported beatings and other abuses during arrests and detention, and spoken out against their loss of livelihood.

SOCFIN and several of its subsidiaries have repeatedly been in the spotlight over their environmental and human rights record. In February 2016 Greenpeace France published a report (in French) highlighting the company’s “glaring lack of environmental commitments” at its plantations in the Democratic Republic of Congo and Sao Tome and Principe. The report brought attention to an alleged failure by the company to carry out proper environmental and social impact assessments, identify risks or propose mitigating measures.

Three months later Greenpeace published a case study underlining how expansion plans of two SOCFIN oil palm and natural rubber plantations in Cameroon – belonging to SOCFIN’s subsidiaries Socapalm and Safacam – threatened nearly 15,000 ha of forests. According to the NGO, these expansion plans lacked the adequate impact assessments or consultations with local communities. In fact, Socapalm had already started draining and clearing 1,800 ha of swamp land without engaging in dialogue with affected communities or drawing up mitigation plans for environmental conservation.

SOCFIN’s plantations in Cameroon have been accused of land grabbing, polluting local water sources, harsh working conditions, and encroachment of communities’ space for food crops. In September 2018, Fern, a conservation NGO, published a briefing detailing “a bitter land rights struggle” between villagers and Socapalm. Local residents accused Socapalm of preventing them from benefitting from their own palm oil, blocking their access to their crops, colluding with local authorities to intimidate villagers and silence protests, and polluting the soil and water that communities depend on.

SOCFIN and its subsidiaries have denied the allegations made by Greenpeace and Fern, and insisted that their findings are based on erroneous information. SOCFIN has also filed a lawsuit in France against Greenpeace alleging defamation.

The company has a history of using the courts to challenge organisations or individuals who criticise it. Between 2009 and 2018 the Bolloré Group or SOCFIN brought more than 20 defamation lawsuits against NGOs, journalists, media companies and authors who had denounced the company’s practices in different countries.

In 2016 Vincent Bolloré sued France 2 television channel for defamation over the re-airing of a documentary portraying, among other things, allegedly degrading conditions of workers at Socapalm.

SOCFIN has also sued NGOs ReAct and Sherpa and media companies Mediapart, L’Obs and Le Point over a documentary exposing alleged land grabbing by Socapalm (a French court acquitted the defendants in February).

SOCFIN has been accused of using the courts to intimidate civil society and anyone who speaks out against the company’s environmental and human rights record.

But those affected by the company’s plantation activities have also made use of the legal system to obtain compensation and demand accountability.

The Bolloré Group is currently embroiled in a court case in France brought by Bunong indigenous communities in Cambodia who are claiming damages and demanding compensation from SOCFIN-KCD, which operates a rubber plantation in Mondulkiri province. The communities allege that the plantation has negatively affected their homes, land and sacred sites.

Cleaning up its act or greenwashing?

In December 2016, with the support of The Forest Trust (TFT), SOCFIN published a Responsible Management Policy committing to greater transparency, respect for human rights and responsible management across its plantations. In January 2017 the company became a TFT member.

TFT has continued to support SOCFIN in the implementation of its commitments, starting in Ghana and Cameroon. TFT has reported some improvement of workers’ conditions in Cameroon while claiming that SOCFIN’s new Transparency Dashboard “represents a new level of transparency for the company.”

While SOCFIN has published information on concession boundaries and traceability data for palm oil and rubber, the company’s progress reports still read more as a series of commitments rather than concrete achievements.

Fern, Bread for All and FIAN’s recent reports raise questions about SOCFIN’s real commitments to change its behaviour more than two years after joining TFT and publishing its Responsible Management Policy.