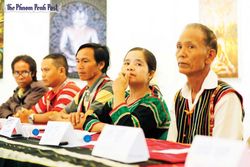 Eleven people at the centre of a case involving seven indigenous Bunong villages in Mondulkiri province pursuing legal action in France have expressed disappointment after the French embassy in Phnom Penh denied their visa applications to attend court.

A press release said the 11 included a lawyer, a translator and nine representatives of the indigenous group, totaling 114 people.

The group, from Pech Chreada district’s Bou Sra commune – who have said they are under threat of losing their land, traditions and customs since the arrival of French development company Socfin-KCD – applied for visas in response to a court summons in France regarding their lawsuit.

The communities filed a civil action lawsuit to claim damages and demand compensation from Socfin-KCD, which received loans from Bollore, which has operated a rubber plantation in Mondulkiri province since 2008.

They claim the existence of the plantation affected the ethnic group’s homes, land and sacred locations.

The Bunong indigenous communities sued the company in a French court after they had lost hope of obtaining justice in Cambodia, Bou Sra community representative Kroeung Tola said at a press conference in Phnom Penh on Tuesday.

In January, a French court issued a summons inviting the nine members of the indigenous community behind the lawsuit to appear at the court hearing in Nanterre, a suburb of Paris, on Tuesday at 11:30am.

The hearing was postponed once before in December, after the plaintiffs could not obtain visas to attend court to defend themselves.

Human rights in ‘high regard’

The ethnic group allegedly lost the right to their land as Socfin-KCD cleared it to set up its rubber plantation, which destroyed everything they owned.

“I hope the French Embassy in Phnom Penh holds human rights in high regard, according to the Universal Declaration of Human Rights and the UN Declaration on the Rights of Indigenous People, and reconsider their decision to reject our visa applications for the next date set by the [French] judge,” he said.

Mathilde Teruya, a political and press counsellor at the French embassy, said in an email on Tuesday that the visa applications submitted did not comply with EU Schengen regulations. “Their presence at the tribunal wasn’t compulsory at this stage of the trial,” Teruya said.

According to a press release from the group, after the community’s lawyer sued Bollore, a company representative claimed it did not know the community or who had taken legal measures against it.

A Cambodian Centre for Human Rights (CCHR) report issued last year said more than 800 families were affected by Socfin-KCD, with most of them Bunong.

At least 640 families were involved in the land dispute after the private company received an economic land concession covering 2,386ha on a 70-year lease for rubber plantation and agricultural products.

Mondulkiri provincial authorities claimed the land dispute had been resolved. However, the villagers said they were locked in lawsuits.

“Before opting for an international court, I tried to go through all the authorities, starting from the village and commune levels all the way to the provincial court.

“Our issues were not taken care of. The courts kept withholding the case . . . not taking action. However, when a completely nameless company representative filed a lawsuit against us, authorities did not drop the case.

“We’ve lost hope. We’ll no longer depend on the Cambodian court system as it cannot offer us justice. So I opted for the international system,” Tola said.

Mondulkiri provincial court spokesperson Meas Bros told The Post on Tuesday that it was the group’s right to say whatever they wanted, but the provincial court proceeded as per procedure after obtaining a complaint from the indigenous group.

The court investigated as normal and has no comment on the villagers seeking intervention at an international court, Bros added.

“The [land] dispute occurred a long time ago. We cannot review their complaint right after they submitted it. The judge is currently investigating the case, but some of their leaders keep wanting to come to court,” he said.


[Note from GRAIN: The trial has been postponed again until 1 October 2019, so that the Cambodian representatives may get their visas and attend]