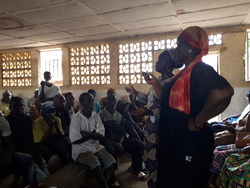 All that is needed by these women now is how to fix their broken pieces of their lives again especially this time when the very little that was left is all gone.