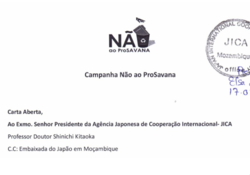 Subject:  Protest against JICA’s impacts on Mozambican society in relation to the ProSavana programme

This is the first letter that peasants and civil society organisations of Mozambique that are part of the “No to ProSavana Campaign” send to JICA.

All the facts and primary sources collected by the No to ProSavana Campaign confirm that JICA’s interventions are destabilising the transparent and democratic process in ProSavana, whether through financing, functionaries or consultants. These interventions have negative impacts on the human rights, the right to land and the food security of peasants and their way of life, including their culture, undermining the independence of Mozambican civil society and causing fragmentation.

The interventions violate the Guidelines for Socio-Environmental Considerations and the Compliance Policy of JICA, the United Nations Charter, the International Covenant on Civil and Political Rights and other international laws that Japan has signed, as well as the constitution of the Republic of Mozambique.

It has been a long time since the No to ProSavana Campaign requested, without success, information about ProSavana, above all on what this programme means for agriculture in Mozambique. Information about ProSavana is still kept secret. However, the No to ProSavana Campaign has gained access to allegedly confidential information that reveals reprehensible behaviour on the part of JICA, violating a number of principles, norms and values governing its activity and the peoples of the States involved in ProSavana. Such facts demonstrate that the actions and accountability of JICA have not been fair, transparent or responsible.

Through this letter we wish:

It is not true that JICA is bringing “development” or “help”, considering that their actions follow the principle of “do no harm”. JICA’s actions, as their own documents show, must create conditions that threaten fair, democratic, transparent and responsible governance of Mozambique. It is important to state that the No to ProSavana Campaign promotes and defends constitutional values, respect for the democratic state of law, a culture of peace, social justice, pluralism of expression, respect for human rights, the defence of sovereignty and other fundamental objectives as stated in Article 11 of the constitution of the Republic.

The documents that the Campaign informally accessed reveal at least four JICA sub-projects in the sphere of the ProSavana-PD (Support Project for the Preparation of the Master Plan) for the financing, planning, implementation and initiation of the intervention in Mozambican society:

It should be emphasised that the first three projects were designed and implemented without any civil society’s knowledge.

The facts outlined below are included in the JICA documents referred to above. They reveal violations of constitutional norms, principles of international law and its own guidelines:

a) JICA’s terms of reference of JICA, which oriented the Mozambican consulting company (CV&A), clearly define a “plan of action and intervention for each interested party”. [i] Through this contract, the “ProSavana: Communication Strategy” was defined by JICA in September of 2013. [ii]
b) In the strategy, clear instructions are described for how to “discredit” and “reduce the importance” of Mozambican civil society. [iii]
c) For the implementation of this strategy, JICA signed a contract with CV&A, negotiated in an extraordinary way.
d) As the campaign against ProSavana continued, JICA contracted another consulting company (MAJOL) to investigate the “position and interests” in ProSavana and the “capacity to influence” each civil society organisation involved in the protest, as well as certain individuals. It even formed a “ProSavana advisory committee” that would be the only “platform/dialogue mechanism” between the governments and civil society [iv]. Thus, MCSC-CN was formed during MAJOL’s period of consultancy work for JICA, in February of 2016. [v]
e) The terms of reference of the contract between JICA and MAJOL clearly identify which organisations and individuals were favourable to ProSavana, as a result of previous MAJOL research, and who were invited to the preparatory meetings without any authorization from the Ministry of Agriculture and Food Security (MASA) and the ProSavana Coordination Cabinet. [vi]
f) After the creation of the MCSC-RN, the No to ProSavana Campaign obtained, once more, informal access to MAJOL reports submitted to JICA, in which it was clear that the contract included interference in Mozambican civil society, especially in the North, the creation and reinforcement of divisions within civil society and the isolation of those who opposed the program. [vii]
g) As a result, JICA was able to divide Mozambican civil society.

These facts and strong claims have been publicly denounced in press releases. [viii] But, instead of addressing them, JICA only increased its interventions within Mozambican civil society.

The intervention of JICA and the Japanese government in Mozambican media
The above describes how JICA intervened in our society though the financing, planning, implementation and supervision of its sub-projects in ProSavana-PD. These activities violate legal principles and JICA guidelines, the United Nations Charter, international law and our constitution, with significant negative impact on Mozambican society.

Demands of the organizations articulated in the No to ProSavana Campaign:
Because of the irregularities exposed and the lamentable actions of JICA in this process, the No to ProSavana Campaign requests:
To this effect, and given the urgency of the situation, we request that this letter be answered by 24 February 2017, based on the Guidelines “1.4 Basic Principles” of the JICA document, 3) “Responsibility for Accountability”; 4) “Response of JICA to Stakeholders’ Questions”; 5) “Divulging of Information” to ensure accountability.

Finally, the No to ProSavana Campaign remains united and will continue to struggle against environmental, social, economic and political injustice and inequality and for the defence of human rights and interests related to access and control of the land, water, forests, air, the common good and cultural and historical patrimony. We still have Article 81 of the constitution of the Republic of Mozambique, which protects the right of the peoples to protest. The No to ProSavana Campaign reaffirms its opposition to the ProSavana Programme and promotes a broad mobilisation of national and international social movements, particularly those concerned with defence and protection of human rights, to resist and fight against ProSavana.

Anabela Lemos
JA! Director, representing the organisations of the No to ProSavana Campaign