So what is happening in the Bas-Mangoky in Madagascar? 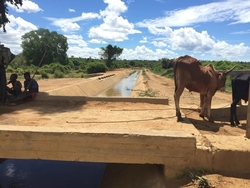 SO WHAT IS HAPPENING IN THE BAS-MANGOKY IN MADAGASCAR?

With one year to go before the end of the presidential term, Malagasy leaders are preparing to present Madagascar's Emergence Plan to the public. An important part of this plan consists of attracting investors, mainly foreign, into the agribusiness sector. However, the suspension of a project to make 60,000 ha available to an agribusiness company in the Bas-Mangoky has just been announced.

This communiqué will outline the reasons for the suspension, some facts about the area and the lessons we propose to draw from the current situation.

The Malagasy Minister of Agriculture and Livestock held a press conference on 10 October 2022 regarding investors in Bas-Mangoky in southwestern Madagascar. According to media reports, he announced that the project to exploit 60,000 ha is "suspended". The journalists did not mention the name of the investor concerned, but observers all recognised the Emirati company Elite Agro LLC, with which the previous Minister of Agriculture had announced the signing of a Memorandum of Understanding in January 2020.(1)

In fact, according to the Minister's comments reported in the press, the investors would like the Malagasy state to “put in place the facilities necessary for their establishment on the site” and “commit to certain development projects” which “is currently the case", the Minister was quick to point out, mentioning “pedological studies” underway to find out about the soil structure.

The Minister also referred to “a difficult and risky sector due to climate-related hazards which explains the investors' apprehension to engage in agribusiness”.(2)

It is very surprising that the investors suddenly have an issue with the well known problem of insufficient rainfall in the South of Madagascar, climate change as a risk for agricultural production, and the precariousness of communication infrastructures throughout the island.

The investor’s demands reported by the authorities seem outrageous and raise various questions:

Will the Malagasy leaders agree to carry out preliminary infrastructure works for a multinational company that presumably has the capacity to do so itself?(3) And this, in order to produce food on Malagasy territory, according to a Memorandum of Understanding, the exact terms of which have still not been revealed either to the farmers of the area concerned or to the public? Should the Malagasy people, through the state, “subsidise” this project which at the same time deprives them of their own fertile land?

This situation is reminiscent of what is happening in Sierra Leone, where the government itself will pay the first four years of a lease granted to Elite Agro to grow rice on 15,000 ha.(4)

The content of the Minister's speech during the press briefing raises questions and concerns about the links between the left and right banks of the river in the area known as Bas-Mangoky.

What is the connection with developments on the other side of the Mangoky River?

While the 60,000 ha planned for Elite Agro LLC are located on the right bank of the river, on the other side is the Bas-Mangoky development project which began in the early 1960s and has been financed since the 2000s by the African Development Bank (AfDB) to the tune of several tens of millions of US dollars for the installation of Malagasy families wishing to engage in agriculture (5).

In May 2022, a “loan agreement of US$2.4 million to finance the feasibility study of the Pôle de développement agricole de la rive droite du delta de Bas-Mangoky” project was signed between the Malagasy state and the AfDB group (6). This loan, which explicitly concerns the agropole intended for Elite Agro on the right bank, had already raised the indignation of citizens defending Malagasy land. A decree for the creation of agropoles in Madagascar in 2019 mentioned that its adoption by the government was a pre-condition for the disbursement by AfDB of the 3rd tranche of the Economic Competitiveness Application Programme III.

Then, in September 2022, representatives of the farmers on the left bank of the Mangoky River protested against the state's new decision about the division of the land between them and the state. In the “initial agreement, the beneficiaries were to retain ownership of 75% of the land” that they had exploited and cede 25% to the state. A new provision has now been made to apply the so-called “market value”, which reverses these proportions. The farmers' spokesperson describes this change as unfair, as it will mean that Malagasy farmers will only be able to benefit from 25% of the land they have been farming since before the development work funded by the African Development Bank (7).

A Malagasy-language media reported on 11 October that a “committee des experts” charged with monitoring the future of Bas-Mangoky had sent an open letter to the AfDB concerning the farmers' disgruntlement and warning of a possible explosion of public anger (8).

Knowing that the land intended for investors must first be registered in the name of the state, which will then lease it – or lend it, as in the case of Elite Agro – to usually foreign companies, we strongly fear that the hydro-agricultural developments intended for the benefit of Malagasy farmers are being handed over for the use of foreign investors, Emirati or not. These works were financed by the AfDB through debts that future Malagasy generations will take decades to repay.

What lessons can be learned from the current situation?

We hope that this incident, which occurs in a context of great infatuation of Malagasy decision-makers and senior leaders for foreign investors, has convinced the government of the truly indispensable nature of hydro-agricultural infrastructures and water control for agricultural production, particularly rice growing. All the more so since wealthy investors well experienced in running agribusiness operations in various climates around the world, like Elite Agro, are calling for them.

Large irrigation systems and roads require heavy investments that are not within the reach of Malagasy farmers, who already suffer insufficient access to land and struggle to produce enough to feed their families and supply the local market.

If the state undertakes these works everywhere, and allows millions of small producers to benefit from them, Malagasy farmers will be able to feed the country with their small or medium-sized farms, and leaders will not be at the mercy of foreign investors who seem to demand that the Malagasy state brings them everything on a platter while their own projects would provide a limited number of jobs with working conditions that are not necessarily acceptable, since everything will be highly mechanised.

The Minister has clearly stated that only part of the harvest produced by the investors will be sold to the Malagasy state. It is not known at what price. Nor do we know whether the price at which the state resells the food on the domestic market will be affordable for ordinary Malagasy citizens who have given up their land to investors, via the state, “amicably” or through expropriation in the public interest.

The evidence shows that in the Bas-Mangoky area, in order to please foreign agribusiness investors, Malagasy leaders are determined to sacrifice the good intentions of the past to allocate land and hydro-agricultural infrastructure to Malagasy farmers. The Minister's press conference may mean that not everything is working out the way the leaders want it to in terms of investor enthusiasm. But the press briefing could also have been aimed at informing the public about the decision of the leaders to bow to the demands of foreign investors, and probably the donors who are financing the various irrigation schemes and road construction in the area.

The state and the Malagasy people are the big losers in the whole national agribusiness strategy currently being implemented. The priority reliance on foreign investors to ensure the “food self-sufficiency” of the Malagasy seems to have reached such an impasse that the Minister has made it clear that he will not give up but will continue to seek international investors while mobilising Malagasy investors.

For our part, we continue to support Malagasy farmers in their demands to decision-makers to have better access to land and to obtain the necessary support in terms of infrastructure to make their work more remunerative and to spare the majority of the Malagasy population from the threat of famine.

We reiterate our call to the high leaders of the Malagasy state for a change of strategy in the fight against famine and food insecurity in Madagascar, and to give priority to supporting and accompanying Malagasy peasant family farmers.

Collective for the Defence of Malagasy Land - TANY