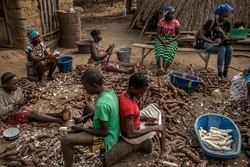 A researcher interviewing villagers in a farming community in northern Sierra Leone, in February. Until now, these communities have had little say over projects. Credit: Finbarr O'Reilly for The New York Times

The West African nation will let communities veto mining, farming and industrial projects. Activists say the legislation is a progressive landmark. At least one investor calls it unworkable.

DAKAR, Senegal — It is a struggle that communities across the world have faced: stopping companies from grabbing their lands, polluting their environment and forcing them to relocate.

When a major investor sees an opportunity to profit from a mine or large-scale agriculture, long-established ways of life, and even land ownership rights, often prove to mean little.

But in one West African country, Sierra Leone, the rules of such struggles may be about to change drastically.

Under new laws passed this week, companies operating in Sierra Leone will have to obtain the express consent of local communities before starting mining, industrial or farming activities. Residents owning land will be able to veto any project affecting it. And the government will have to help pay for any legal fees that the local communities incur in negotiations — meaning it will most likely finance legal expertise used against the companies.

Environmental and land rights experts have hailed the laws as a bold step for the nation of eight million people, which remains among the world’s poorest despite extensive natural resources, and even as intensive mining and palm oil and sugar cane plantations have led to deforestation, landslides and soil erosion.

The new laws, which the president is expected to sign next week, are some of the first of their kind to apply across most of a country’s territory, and will be among the world’s most protective, according to human rights and environmental observers.

“To our knowledge, there is not a legal regime anywhere, in either hemisphere, that grants such robust rights to communities facing harm,” said Sonkita Conteh, the director of the Sierra Leone program at Namati, a nonprofit providing legal training to local communities.

The legislation has also generated pushback, with companies warning that it would hamper any new land development. At least one significant investor said that he would not attempt new projects in Sierra Leone because of one of the new laws.

Nonprofits and international organizations have long fought to force governments and businesses to seek consent from local populations before starting large-scale projects, with Latin and Central American countries at the forefront of this fight.

“Usually companies are given concessions before they obtain the consent from the populations, and then they ‘inform’ them,” said Natalia Greene, a climate change activist based in Ecuador. “They offer people a sandwich, make them sign something, and that’s it.”

In Sierra Leone, until now, most communities have had little say over projects. Companies mining gold, titanium or diamonds, or growing palm oil, have often bypassed residents through agreements with local chiefs or government officials to operate on their lands, according to observers.

Cormac Cullinan, a Cape Town-based environmental lawyer, said the right to what legal experts call “free, prior and informed consent” was a worldwide issue.

“Those who live somewhere have the greatest moral rights to be consulted and to say no,” said Mr. Cullinan, who represents Indigenous South Africans seeking to halt the construction of the African headquarters of Amazon in Cape Town.

“But that right is often not recognized in law.”

This is changing in a handful of countries. In 2018, Sierra Leone’s neighbor, Liberia, adopted a law requiring prior consent from rural populations across most of the country’s territory, although unlike in Sierra Leone, the government can still circumvent local communities to allow mining activities. In February, Ecuador’s highest court enshrined a similar right, but it applies only to the country’s 14 recognized Indigenous groups.

Two of Sierra Leone’s new laws, the Customary Land Rights and National Land Commission Acts, are going the furthest, according to environmental experts, capping a decade of fights by local organizations against land grabbing and pollution. A third law, adopted on Tuesday, strengthens community protections against mining activities.

The laws will apply to each of Sierra Leone’s provinces, but not the capital city, Freetown, and its suburbs, which have a different legal system. Around 95 percent of the country is governed by customary law, with unwritten rules and oral traditions determining who can own, use or transfer land, often at the disadvantage of certain ethnic groups and women.

One of the laws will also end a colonial-era rule preventing descendants of freed slaves from owning land outside Freetown.

Mr. Conteh, the legal expert at Namati, said that until now families could easily be dispossessed of their lands, either because they had little proof of ownership, or because companies would strike deals with intermediaries.

The new legislation in Sierra Leone transfers power from intermediaries such as community leaders to people owning or directly using the land.

It also states that women should have equal land rights, without interference and discrimination, a problem that has long plagued Sierra Leone.

While women make up the majority of the country’s agricultural work force, they often face barriers to owning land, according to Aisha Fofana Ibrahim, a professor of gender studies at the University of Sierra Leone. It has left them dependent on their husband or male relatives and at risk of losing access to land in case of divorce or death, she said.

The new legislation creates committees tasked with managing communal lands and resolving land disputes, at least 30 percent of whose members will have to be women. “The law is a huge win for women,” Dr. Fofana Ibrahim said.

But Idrissa Tarawallie, a professor of political science at the same university, said he was more ambivalent about the legislation’s benefits. One of the laws may strengthen communities in dealings with foreign companies, he said. But another, which promises new processes to determine who owns land, could pit some Sierra Leoneans against one another.

“Land in Sierra Leone is tied to issues of tribes, ethnicity and origin,” Dr. Tarawallie said. “But after Ebola and Covid, it is the new diamond,” he added. “Applying a liberal approach to land ownership without a thorough application of tradition and culture might lead to clashes.”

Some firms have also criticized the legislation. Gerben Haringsma, the country director for Sierra Leone at Socfin, a Luxembourg-based company that has grown palm oil in the country for a decade and has faced accusations of land grabs, argued that the laws would make new large-scale investments in agriculture impossible.

Mr. Haringsma said in an email that he welcomed legislation clarifying who owned land in Sierra Leone. But he argued that with the land rights law, too many community members would now have to be involved in investors’ decision processes.

“With this law, populations do not have to be protected as major investors cannot start major projects anymore,” Mr. Haringsma said.

Ms. Greene, the Ecuadorean consultant, said Indigenous people and local communities worldwide should have better information about projects affecting their livelihoods, as well as the right to veto.

And given the opportunity, they would use that veto, she said: “Most of the communities, if they’re properly informed of all the environmental impact, will say no.”

Elian Peltier is the West Africa correspondent at The New York Times. He joined The Times in 2017 and was previously based in Paris and London. He now lives in Dakar, Senegal. @ElianPeltier