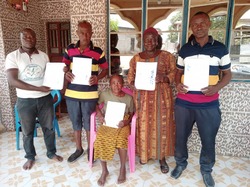 The petition signed by 1,475 MALOA Members, objecting to the certification of Socfin Agricultural Company by the Roundtable for Sustainable Palm Oil (RSPO) on the 10th of March 2022, has been disqualified as fraudulent by the Chiefdom Authorities and the District Multi-Stakeholder Platform (DMSP) of Pujehun. Green Scenery views the reports of those institutions as unfounded and as a further intent to silence and criminalize opposition to the operation of SOCFIN in Malen chiefdom.

While the report of the Chiefdom Council consists of a single paragraph, it claims without offering any proof, that 95% of the signatures are fraudulent, that international NGOs collaborated with MALOA, that children signed the petition, and that a petitioner pleaded guilty to the fraud. Green Scenery is well informed that no international NGO supported the activities as only Green Scenery offered levels of support including technical to MALOA.

MALOA further assured that none of their members signed on behalf of anybody else, and no children were asked to sign. Finally, while it is true that one MALOA member was prosecuted, the court sitting transcript reports that he pleaded guilty “for registration of Community people without the knowledge of Town Chief”, which does not involve any forgery as the publication from the Chiefdom Council illusively imply. This act cannot be regarded as a criminal act, on the contrary, it exemplarily shows the arbitrary criminalization of innocent land activists in Malen Chiefdom.

Land for Life (LfL), a supporter of the DMSP distanced itself from the DMSP report on the 18th of May. LfL explained that the Public Relation Officer of SOCFIN who is a member of the DMSP requested an investigation into the matter, which clearly undermines the independence of the DMSP in this matter. Abu Brima, Director of NMJD said during a press conference on the 18th of May, that “the DMSP was subjected to manipulation”. Furthermore, LfL expressed concerns that the report is “entirely focused on identifying people who signed or didn’t sign, and not to ascertain whether the issues raised in the objection notice from MALOA are of substance in the Chiefdom”.

Green Scenery further questions the accuracy of the DMSP report. While most allegations remain vague, such as “in some communities…” or “some people signed…”, it failed to provide necessary proof that 80% of the people denied knowledge of the petition. In fact, merely two names of allegedly inappropriate signatories are mentioned in the whole report.

One of the two names, Adama Magba, which is supposed to be a four years old child, does however not appear on the petition, raising further doubt about the accuracy of the DMSP investigation. Finally, according to MALOA none of the conflicts between focal persons and communities mentioned in the report happened.

On the 6th of May, Green Scenery published a press release warning of Malen being a police chiefdom as a result of serial harassment, intimidation and criminalization of citizens who signed the petition. Green Scenery further warned that announcements were made by Chiefdom Authorities in various communities that signatories to the petition would be prosecuted in local courts. Whilst we generally question the accuracy of the reports, we can assert that due to the mounting threats existing in the communities, citizens of Malen Chiefdom were already in fear to acknowledge their participation in the petition to the investigating DMSP that was accompanied by the Office of National Security and whose sole inquiry was over who signed the petition and not the relevance of the content of the petition.

Green Scenery continues to maintain that the rights and the freedom of expression of MALOA members are being undermined by the interests of a large multi-nationals in connivance with local and national state representatives. As Abu Brima, director of NMJD said in LfL’s press conference, “corporate entities have captured state institutions”. Green Scenery, therefore, asks RSPO to understand that MALOA is not an organization of only a few members, but that as LfL stated, it “comprises of majority of the landowners and land users of the said (Malen) Chiefdom”. Their grievances are real and should accordingly be taken seriously by the certifying body that failed to adequately engage them in its last visit. We further ask the Civil Society of Sierra Leone to visit the communities of Malen Chiefdom and assess the veracity of the reports published regarding the RSPO certification of SOCFIN in the last weeks.