Liberia: Villagers struggle to honor the dead after losing graveyards to investors 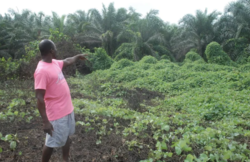 Kandakai Blasuah, who lost his sister’s grave to Sime Darby, points to where it stood before the company illegally cleared it in 2010. (Photo: The DayLight/Varney Kamara)
Daily Observer | 21 March 2022