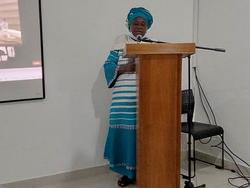 Women in the districts of Bombali and Pujehun, affected by the large-scale land acquisition by multilateral companies have called on the government to ensure inclusiveness in decision- making and good governance of their lands.

Speaking at an event held in Freetown on the 10th of December this year, to mark the end of a journey of a Caravan of actors in the global struggle for responsible governance of land, water, food, and the environment, Hannah Deen, member of the Malen Affected Land Owners Association said most decisions relating to land in Sierra Leone are not inclusive of women, hence any family that does not have a male child stand to forfeit their lands.

She said the land agreement with Socfin Agricultural Company in Pujehun district has affected many homes in the chiefdom, noting that the situation is further heightened by their paramount chief whom she said does not tolerate any critical voice raised against the company. “We are women and were not sent to school and so we have no other source of livelihood apart from the lands which our parents left us to farm on. But all have been taken away from us and given to Socfin. Land agreement are done by men which means, the arrangement for our lands were done in our absence,” she said.

She went on to call on President Julius Maada Bio to reflect on the promise made to the people of Malen chiefdom during his campaign periods that he will bring an everlasting solution to the problem between them and the company when elected.

In addition, she also urged the government to make public the report of the technical committee which was set up by Vice President, Mohamed Juldeh Jalloh in 2019 to look into the issues between the community and the company. She said they are willing to accept the outcome of the report whether it’s in their favour or the company.

Another woman, Zainab Kamara, from Waorayma chiefdom in Bombali district, the operational base of Adax-Bio-Energy Company said women are the most vulnerable group when it comes to issues of land rights, and justice.

She said, this is because they will have to go through the hurdles of fetching clean water from far distances, and that no land to farm means no source of livelihood for most of them. She therefore called on the government to ensure justice, good governance, and inclusiveness before any dealings that have to do with the land in rural communities if women should benefit.

Speaking at the event, Member of Parliament, Paul Saa Sam of Constituency 025 in Kono district noted that most of the land conflicts recorded during their monitoring role were from Sahn Malen chiefdom. He noted that 75 percent of the lands in the chiefdom are owned by the company and for 75 years of operation. “The large land acquisition from farmers and also the landowners, I pity the people from Sahn Malene, the Agriculture committee which I belong, went to Sahn Malen in 2019 and we saw so many things that the people are suffering from,” he said.

He added that the Member of Parliament from that end, stood very firm by his people to see that their voices were heard. “As a committee, most of the problems we found out are from Sahn Malen. If somebody takes 70 to 75 % of the land, how can the people farm? Also, the wastage from even the plantation, the people do not have access to it. This is very serious,” he admitted.

He said the situation is a result of the obsolete laws relating to land with some being in conflict with others. He noted that the Socfin agreement needs to be given another look as it has an effect on food security. He pledged their commitment to ensuring that good land laws and policies that can benefit the people, are passed.

In his statement, Massa Kone, leader of the West Africa Caravan expressed satisfaction that 10 countries in West Africa were on the caravan, noting that land conflict is a major issue affecting Africa as a whole and that it is good that they stand together to ensure good governance of the natural resources.

He called on African governments to ensure the review of land laws in an inclusive manner as peace depends on good natural resource management.

In his keynote address, Dr. Mammadou Goita, Executive Director of the Institute for Research and Promotion of Alternatives in Development in Mali said the uneven distribution of land and other natural resources in Africa has created more gaps between the rich and the poor, creating room for conflict.

The event was climaxed by a panel discussion on some of the issues and recommendations presented on Warayma and Sahn Malene cases by Green Scenery Sierra Leone’s Executive Director, Joseph Rahall.

The West African Caravan according to officials is an event that aims at strengthening the awareness of grass-root communities in order to engage decision-makers for the improvement of policies and legislation for a progressive, fair and equitable governance of land, water, and peasant seeds for a social transformation in West Africa taking into account, family farming based on peasant agro-ecology for food sovereignty.

It takes place every two years and brings together various stakeholders to demand governments’ actions toward responsible governance of land, water, and seeds. The first edition of the caravan brought together more than 200 actors in March 2016 under the focus of Right to Land, Right to Water: a common struggle! It mobilized twelve (12) countries and crossed three countries, Burkina Faso, Mali, and Senegal, with 11 stops in 17 days and nearly 10,000 people reached.

This year’s Caravan passed through 3 countries including the Gambia, Guinea Bissau, Guinea Conakry, and converged in Sierra Leone on 5th December 2021.