Oil palm in Cameroon: 145 local community members against the Bolloré group in court 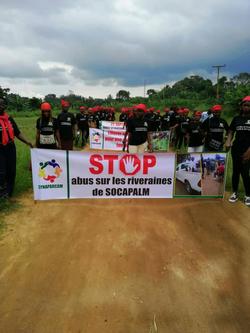 Oil palm in Cameroon: 145 local community members against the Bolloré group in court

By La Provence (with AFP)

Some 145 Cameroonians have asked the French courts to force the Bolloré group to provide documents to establish its links with the Cameroonian Company of Oil Palm Plantations (Socapalm) that they accuse of violating their rights.

Socapalm "inflicts damage on a daily basis" to these villagers, their lawyer, Me Fiodor Rilov, told AFP. According to him, the exploitation of oil palm plantations denies them access to lands and burial places and pollutes waters.

On Tuesday, the lawyer tried hard to convince the court of Nanterre (Hauts-de-Seine) to order the Bolloré group to produce documents supposed to prove either the control it exercises over Socapalm, or the commercial relations established with it via a Belgian-Luxembourg holding company, the Société financière des caoutchoucs (Socfin). If this were the case, the Bolloré group would be subject to the French "duty of care" regarding Socapalm's activities in Cameroon.

A 2017 law requires large companies to prevent serious human rights and environmental abuses by their foreign subcontractors and suppliers. To prove the links between Socfin and Bolloré, Mr. Rilov asked the court on Tuesday to force the group to produce documents attesting to its "dominant intervention" in the appointment of Socfin's managers, including minutes of general meetings.

The court is expected to render its decision on January 7.