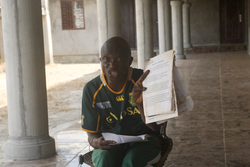 Morris Beah, a spokesman of the five communities—Gmenee, Kampala, Paye Town, Morse Town and Wesseh Village—displays documents as he speaks on a conflict with Equatorial Palm Oil (EPO) over the company’s expansion on their land in 2016. (Photo: New Narratives/James Harding Giahyue)
Front Page Africa | 22 March 2021


Liberia: Farmers demand ‘balance’ payment In land deal with Equatorial Palm Oil in Grand Bassa County
By James Harding Giahyue
Editor’s Note: This story is the first of a two-part series on growing tension between Equatorial Palm Oil and villagers in Grand Bassa County over land rights.
JOGBAHN CLAN, Grand Bassa – October 6, 2016 was a happy day for Morris Beah and other townspeople of Gmenee, Wesseh Village, Paye Town, Morb Town and Kampala, which roughly translates “transit” in the Bassa language. They gathered in an old palm oil mill at Equatorial Palm Oil (EPO) to receive compensation for their crops. The predominant rubber farmers accepted the money from the Malaysian company to expand its plantation on their land in the District No. 4.
Beah had been negotiating with the company for the payments for three years. In all, EPO paid the local farmers US$244,597 for their crops. Beah, 51, received US$26,964 for his rubber, palm and cassava.
But more than four years after, the five communities allege they were cheated in the deal. They say the company still owes them, and they demand retroactive payment.
EPO paid Beah and other farmers US$6 for each of their rubber trees, a new price the government set for the tree crop since June 2013. Before then, the price was US$97.92. The reduction from US$97.92 to US$6 was meant to spur development in the country, according to the Ministry of Agriculture at the time. However, the townspeople allege that EPO used the old, higher price to negotiate with them and used a new, lower one to compensate them.
EPO would have paid nearly US$2 million for rubber alone at the old price. That means the communities received just over 10 percent of what they would have been paid for rubber alone. Beah, for instance, would have received US$136,696.32 for his 1,396 trees.
“We want our balance $91,” adds Luke Paye Toe, an elder of Paye Town, who had calculated US$16,744.32 but got US$1,026 for 171 trees. “We wanted improvement. We wanted the company to come to our area so that our children could go to school, not knowing they were going to cheat us.”
“We really want this money because we suffered for it,” says Hilary Gbah, 57, a farmer in Gmenee Town, the largest of the five communities. He received US$14,574 for 2,429 rubber trees but expected to get US$237,847.68.
“They fooled us.”
EPO refutes those allegations, saying it was even generous to the famers to pay that sum for all their trees though the ministry had set US$3 for immature tree crops.
“We paid as per the [Ministry of Agriculture] price list,” says its compliance manager Jasvinder Singh in an interview with FrontPage Africa in Buchanan. “We paid what was set by the [Ministry of Agriculture], which the communities agreed to.” The company also used the old price to pay for all other trees.
‘Threatened in the process’
Beah and other famers were not happy with new price and had even refused the US$ deal. Beah says they accepted the money because they were intimidated, adding that the ministry’s Grand Bassa County coordinator Joyce Kolvah warned that the government would have taken the land by force if they did not take the cash.
“[Joyce Kolvah] said, ‘If you don’t agree, you will be the losers,’” Toe says. “We were threatened in the process, so our people accepted the price.”


Other villagers make the same allegations. But a video of the 2016 crops payment ceremony shows Beah and other community members applauding the company and stating they were not intimidated.
Kolvah denies she intimidated the villagers. “That’s false and misleading,” she tells me, adding  she only monitored the negotiation and oversaw the crops count. “I think that day they wanted the money.”
Kolvah did not just monitor the negotiation as she claims, EPO’s records show. In fact, she helped convince the Beah and other farmers to accept the company’s offer. In a meeting in Gmenee on October 21, 2016, Kolvah called on the townspeople to commend EPO for agreeing to purchase all crops at the old prices, according to minutes from that meeting seen by FrontPage Africa. In another meeting one month earlier, Junior Dolo, a resident of Morb Town, raised a qualm about the US$97.92 price. He and other residents stepped aside to discuss the price, came back and accepted the US$6.


The five communities plan to lodge a complaint with the Roundtable on Sustainable Oil Palm (RSPO), an international watchdog that holds its oil palm companies to high, environmental and social standards. EPO is a member of the certification scheme through its majority shareholder (62.86%), Kuala Lumpur Kepong Berhad (KLK), one of the world’s oldest and largest oil palm multinationals. The farmers have sought the assistance of Sustainable Development Institute (SDI), a nongovernmental organization that has been working in the clan for a decade now.
James Otto, who heads SDI’s community rights and corporative governance program, believes the farmers. “The crop compensation was very dubious,” Otto tells me in an interview in Paynesville. “It was a gameplay to induce the community into giving out their land.” SDI has been investigating the controversial crop payments since 2017. It will exhaust all avenues in Liberia for redress before filing the complaint with the RSPO, according to Otto.
Before its involvement in the Grand Bassa District No.4, SDI had played a major role in Liberia’s postwar forestry reform. It helped formulate the Land Rights Act of 2018, which guarantees locals communities’ customary right to land.
It is a huge turnaround in the NGO’s relationship with the aggrieved farmers as with EPO and the communities, and Beah stars in that story, too. In September, 2013, barely a year after their 2012 agreement, a crisis broke out between Jogbahn Clan and EPO. The clan accused the company of land-grab and stopped its replanting. The situation escalated into a riot with the police, leaving several townsmen wounded. After the brawl, the clan requested SDI’s intervention, leading to the first complaint.
SDI lodged the complaint with the RSPO in 2013 against EPO but the watchdog cleared the company of land-grabbing. The RSPO said at the time it was “satisfied that the planting done by Equatorial Palm Oil (EPO) before the new planting notification of 8 December 2014 was a re-planting.” It added “that the new planting of 1,570 hectares is not in the disputed area claimed by the Joghban Clan.” However, it mandated EPO to stop development in disputed areas and address its encroachment into Nnuhn and Qwrakpojilain, two villages in Jogbahn Clan.
But Gmenee, Kampala, Wesseh Village, Paye Town and Morb Town were not part of the 2016 RSPO complaint. Unlike their neighbors, they welcomed EPO to acquire their land. At times, they even denied SDI’s campaigners access to their communities. In one meeting in 2016, Beah ordered SDI campaigners out of Gmenee as the NGO tried to mediate between farmers and the company.
“I think this is a classic example of how the companies, especially oil palm companies, have conjured community members to support their scam against environment, rights-based organizations in the name of development,” Otto says, recalling the incident. “Beah is one example. However, after realizing that they were used, including he and his other colleagues, he then comes back to fight because all of the promises are unrealistic.” EPO denies making any promises in Jogbahn it did not keep, saying it seconded Beah to supervise a smallholder oil palm project in collaboration with the World Bank. Beah says he has not had another job with the company since then.
The communities and EPO are negotiating a memorandum of understanding, including a possible agreement on the past compensation. But Beah and other villagers demand the payment. “I and other farmers will not waive our rights,” he says. “I am Morris Beah. [EPO] management can bring about 100 lawyers, we will fight this case to the letter.”
Original source: FrontPageAfrica
TWITTER
FACEBOOK
WHATSAPP
PRINT
E-MAIL
TWITTER
FACEBOOK
WHATSAPP
E-MAIL