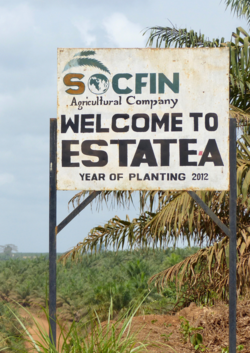 (Excerpt from the report "Do no harm". Please see full report for footnotes & references.)

The Malen chiefdom in south Sierra Leone used to be a diverse ecosystem where villagers of the Malen community could make a living with small scale farming, hunting and gathering. Until SOCFIN arrived in 2011 to sign a lease agreement with the Sierra Leone government to use the land for palm oil plantations.

Two more contracts followed and SOCFIN, a Luxemburgish-French-Belgium agro-industrial company, took control of 18,473 hectares of the Chiefdom’s total 27,000 hectares of land. Even though the Paramount Chief of the Malen kingdom had agreed to cede land to the government, a large part of the communities in the area claimed the agreement was illegitimate. The 32,000 people living in 53 villages had never been consulted and had never given their ‘free prior and informed consent’.

“SOCFIN never holds participatory consultation processes in the villages. They tried only to achieve the consent of two or three landowners in the villages by making promises, and after that they claim that the whole village accepted to lease the land”, a villager from Bassaleh town explained to FIAN Belgium in 2012.

SOCFIN was supposed to pay fair compensation for the loss of land and crops, but villagers reported that the compensation paid was insufficient and not according to the agreements.

“We had 60 acres of palm trees but after the survey, they considered it was only 10,” a resident of Gandorhun Town told FIAN Belgium in 2018.What followed is a still ongoing process of villagers trying to get justice while the palm oil plantations of SOCFIN - and the multiple negative impacts that comes with it, in relation to access to land, working conditions, pollution or criminalisation - encroach further and further on the land of the Malen people.

Sierra Leone is not the only country where SOCFIN is accused of violating human rights. In Cameroon, Cambodia and Nigeria NGOs also report land-grabbing, followed by environmental pollution and repression of villagers trying to get justice.

SOCFIN, originally a Belgium agri-industrial company founded in colonial times, is registered in Luxembourg and owned by the Belgium businessman Hubert Fabri (54,2% of the shares) and French businessman Vincent Bolloré (39% of the shares). The company has a highly complex ownership structure with many subsidiaries active in 10 countries in Africa and Asia and owns 192 900 hectares of palm-oil and rubber plantations.

SOCFIN is known for its aggressive strategies against those who criticise their behavior. In 2018 SOCFIN started a SLAPP suit (strategic lawsuit against public participation) against a group of French NGOs and journalists, followed by a similar case against a group of Belgium NGOs later that year. Since 2009 more than 20 libel cases have been launched mainly against European journalists and NGOs writing about SOCFIN or Bolloré.

Locally, villagers protesting landgrabs often claim that they face repression by the company itself and/or the state that protects the transnational corporation. In Sierra Leone, victims organized themselves in the Malen Affected Land Owners and Land Users Association (MALAO) and filed a complaint to local authorities and the Human Rights Commission of Sierra Leone (HRC). When neither process led to any outcome, they started organising protests. In reaction to that, six members of MALAO were arrested and accused of ‘destruction of growing plants’, ‘conspiracy’ and ‘incitement’. They were convicted in 2016 and had to pay heavy fines.

This repression strategy effectively prevents access to justice for victims of the company. “It’s not conceivable for MALOA to introduce a complaint in front of the very same jurisdictions which have convicted them time and time again for riotous conducts or incitement”, explained Florence Kroff from FIAN Belgium.

The convoluted route to justice

The repression at national level has actively blocked access to justice in Sierra Leone and other countries where SOCFIN is active. Therefore European NGOs started several court cases in the home countries of SOCFIN, targeting the parent company and their subsidiaries doing harm abroad. The complex ownership structure of the company complicated these processes.

In 2015 a group of 80 Cambodian farmers started a case against Bolloré Group at the regional French court of Nanterre. In 2019 a group of Belgium and French NGOs went to the same court to trial the Bolloré Group. They contested the fact that Bolloré, the second largest shareholder of SOCFIN, refused to implement an action plan that was agreed in front of the French OECD National Contact Point in 2013, following a complaint related to the impact of Socapalm (SOCFIN subsidiary in Cameroon) on local communities rights. They demanded from the Bolloré Group that Socapalm implement the plan to improve the living and working conditions of the affected communities. Both cases are still ongoing.

The 2019 case clearly illustrates the dysfunctionality of the OECD complaint mechanism, a non-legal remedy. After a lengthy procedure that started with a complaint in 2010 and years of mediation with the company, a voluntary action plan was agreed by Socapalm in 2013. But when Socapalm refused to implement the action plan, the involved NGOs had to turn to legal means to order its execution.

In 2019 three NGOs from the Netherlands, Liberia and Indonesia tried another route to bring justice to the victims of SOCFIN, by filing a complaint against the Dutch bank ING, one of the financiers of SOCFIN. This complaint was accepted by the Dutch National Contact Point and is now in process.

Families continue to suffer while they wait

For the people in the Malen Chiefdom the situation has not improved. Victims are awaiting justice while court cases and complaint mechanisms take years to come to conclusions. “All the land is now plantation. Everywhere is occupied”, said Fassie Vandy, a cassava farmer from the village of Bannaleh. “I want them to pay for my plantation that was destroyed. I am requesting that the company halts its expansion and not enter new lands.”

“We have lost livelihoods and have suffered indignities as a result of the SOCFIN investment. We have been criminalized for speaking out against human rights abuses that characterize the land deal in Malen. We continue to suffer in silence”, MALOA said in a letter to the Chief of Staff of the President of Sierra Leone.

• A mandatory human rights and environmental due diligence legislation with strong enforcement mechanisms could have required SOCFIN to consider whether adequate consultations took place, including respecting the need for free, prior and informed consent, and fair compensation was given.

• This case demonstrates the importance of access to courts in situations like these, since non-judicial mechanisms such as the OECD complaint mechanism were ineffective at addressing the violations that did arise as the company refused to implement what it had agreed to.

• The complex corporate structure of SOCFIN makes it difficult for victims to prevail in legal challenges to the company’s alleged human rights violations. Although some cases are still ongoing, there have been several cases in various forums against SOCFIN that, to date, have not provided an adequate remedy. Another challenge is that the Cameroonian subsidiary is partially owned by the Cameroonian government, which may claim sovereign immunity in the event of a suit.

• A mHREDD law must therefore be accompanied by the imposition of liability on the parent company for the harm caused by it or its subsidiaries. SOCFIN should bear the burden of proving that it has no influence or control over its subsidiaries or contractors.

• The EU should ensure EU courts have jurisdiction over cases such as this because of the inadequacy of host state system. In Sierra Leone, the government did not ensure that adequate consultation took place. When victims were unsuccessful in their complaint to local authorities and the Human Rights Commission of Sierra Leone (HRC), they organized protests which the government reacted to by putting the victims in jail and imposing heavy fines.

• Agricultural communities in countries like Sierra Leone and Cameroon may have a difficult time claiming compensation, as their rights may not be recognized or enforced by local courts. It is important that EU courts are able to apply EU law if the host state law would not provide an adequate remedy or does not provide sufficient protection of the environment or human rights.