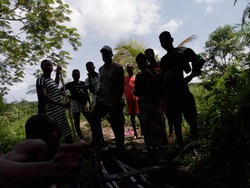 Villagers from Ijaw-Gbene in Okomu Kingdom who had their homes burnt down on 20 May 2020 by agents of the Okomu Oil Palm Plantations Company.
Galaxy Television | 15 June 2020


Another terror attack on local communities by Okomu Oil Palm Plantation Plc
Report by Chief Ajele Sunday, Fiyewei (Spokesman) of Okomu Kingdom
The case of Okomu Kingdom playing host to Okomu Oil Palm Plantation Plc has brought in its wake a myriad of problems; environmental despoliation, obnoxious act against the indigent population, excruciating poverty, unemployment, human rights violation, forceful eviction and imminent extermination of Okomu Kingdom and her people. The government of Edo State share joint responsibilities for these negative situation. Since they negotiated a contract that was faulty from the beginning and cannot be implemented without violating the rights of the Community people. Hence the company often boasts that it has a certificate of occupancy, therefore it can go on and on to destroy without any liability.
Giving this background, this report aims to make public the dire situation the people of Okomu Kingdom are facing in the hand of Okomu Oil Palm Plantation Plc (OOPC).
Just recently on the 20th of May 2020 another village Ijaw-Gbene in Okomu Kingdom was burnt down by the management of OOPC, lead by Mr Kingsley Adeyemi a security attached to OOPC. This arsonist attack came on the heels of several treats by Mr Asemota the head contractor on security for the company. The attack was made possible by a joint effort of the company security lead by Kingsley Adayemi and the Nigerian army attached to the company rendering the local farmers and fisher men homeless with all their properties destroyed. The over 80 persons who were living in the village are now homeless, and are squatting in neighboring communities and churches thus exposing them to corona virus attack.
The reporter chief Ajele Sunday stated that this is not the first or the second village that is being burnt but this is the fourth: Agbede village, 31 houses; Oweike village, 28 houses; Lehmon village, 15 houses; and now Ijaw-Gbene, 7 houses.

Okomu Oil has entrenched tactics reminiscent of apartheid South Africa. The ancestral land that we live in is being confiscated before our very eyes and there is nothing we can do because of military pressings.
According to Joseph Miyani, age 59 years, one of the victims:

Very early in the morning, the company security lead by Mr Kingsley Adeyemi and other soldiers storm our village, shooting sporadically before setting our houses ablaze. In the process, people run into the bush, others jump into the river to escape. All our properties, house hold items were all destroyed by fire. Since that day my life has been miserable. I don’t know where to start from. We are now taking shelter in a church building so I want government to help us.
Question--- What might have lead to this attack and burning of the village?

Joseph Miyani repied: Many a times the company security would come and harass us and also accuse us of stealing the company palm fruits, other times Asemota the Head Contractor on Security had come to threaten us in the village that he will deal with us before this came into manifestation.
Question--- is there any other thing you can think of apart from this verbal harassment?
Joseph Miyani replied: On the 15th of may this year, security operatives of the company invaded the house of PASTOR Igbegbe at AT&P community that somebody told them they saw a parrot walky-talky in the hand of his son which Pastor Igbegbe denied. But one of the securities gave the name of the person who told them. Since the boy was not at home Pastor Igbegbe asked them to come back later in the evening. Unknown to Pastor Igbegbe his wife saw the parrot walky-talky with her son and kept it. So the husband ask her to bring it out so that when the security comes back he will hand it over to them. So when the security came back in the evening he handed over the parrot walky-talky to them. But the security men pleaded that their work is at stake, hence the woman should accompany them to see their boss and that they will bring her back. So the woman went with them but the story changed when they later called the husband on phone that his wife had been arrested for stealing the parrot walky-talky. All effort to plead with them fell on deaf ears as she was transferred to Iguobazua Police Division where she was detained. All appeal to get her released failed from the 15th to 17th before she was bailed with the sum of N80,000. While the burning down of the village took place on the 20th of May. 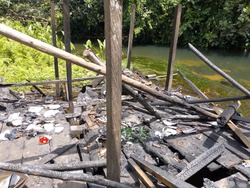 Burnt home of one of the village families.
Mrs Agnes Otomini, aged 63, another victims account:
I left home very early that morning to check my fishing traps, coming back the entire village was quiet as grave yard. All the houses have been razed by fire my concern was my children I almost fainted thinking my life has come to an end. I ran but couldn’t see anybody nor hear any sound . But thank god my children came out alive. It was then they told me that it was OOPC security and soldiers that burnt down the entire village. Now I have nothing left, this is the only cloth on my body, nowhere to sleep and no food to eat. Please I am begging the government to help us. Now there is coronavirus I cannot even go to the city so I am finished.
Rose Miyani, aged 14 (Student):
Early in the morning when I woke up, I see OOPC security and soldiers shooting in to the air while they approach our village. Everybody was afraid and we started running. Some jumped into the river while others run into the bush. I can’t even see my brothers and my sisters. Then the soldiers set our houses on fire. All my books and school uniform were burnt. I have desired to be a lawyer so that I can defend my people but now my hope is gone please let people come and help us. We are now sleeping in a church.
Wisdom Tikan, aged 16 years (student):
I just woke up this morning then I went to the river to check my fishing hook. Before I knew what was happening OOPC security and soldiers were coming. As they were coming they were shooting so I ran into the bush, then they burn down our houses all my school books, school uniform and other properties were burnt down. This is the only cloth left on my body. So let people come and help us. 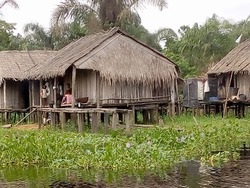 Villages homes before they were burnt.
When OOPC was established in 1976 as a federal government pet project on the ancestral land of Okomu Kingdom, it was hailed as another mile stone in economic recovery and development. Now it is no longer the case, often when people in the area talk about OOPC, they cannot talk of the development benefits; instead they are critical on the company’s negative impact on the communities. It is sad that some contractual provisions which required joint implementation (Communities, Government and Company) were ignored and poorly executed e.g (FPIC, EIAS). Now the oil palms plantations have expanded to the door steps of the people. Their farms and farm lands have been swallowed up, while there are no alternative options for the people. So the men, women and youths are out of jobs, hungry and restless. The resulting effect this has brought are food insecurity and other attendant vices.
In 2018, the fishing equipment of over 35 women were sized from the Okomu river by the management of OOPC. Evidently this is an aggressive drive to emasculate the indigenous communities from their land by depriving them in engaging in their sustainable and traditional economic life. The MD Dr. Graham Heffer ordered the confiscation of the angling  equipments.
Also in 2019 January 17th, precisely, it was an attempt to execute another draconian order in the Okomu River that lead to the drowning of a soldier attached to the company (nemesis).
In 2010, the company also made attempt to evict Marakilolo Community  but was vehemently restricted by the men, women and youths of the community and so many atrocities that time and writing will not contain .
At present, OOPC cut across four Local Government areas of Edo State and occupies about 37,000 hectares of land with similar impacts.
Several efforts made by Environmental Right Action, Friends of the Earth, Coalition of Civil Societies to mediate were all thrown into the dustbin without response from the government and company even after the protests march on June 21st, 2017.
In 2015, the Commander of Joint Task (JTF) Niger Delta, Major General Atewe made several attempts to reason with OOPC but to no avail. In fact when Major General Atewe visited Okomu Community he was touched by the sorry state of underdevelopment of the community. He immediately donated a borehole water and one hundred bundles of wrapper (fabric) to the women which was delivered by Col Balarabe, but Major General Atewe was retired suddenly. It was Major General Atewe who restored our dignity partially.
1.  He stopped the idea of wearing of badges as means of identification before we could access our communities.
2. He also stopped the use of stickers on our vehicles before entry and exit of our communities.
3. He stopped the raising up of hands before we pass through the gates to our communities.
4. He also removed the soldiers from mounting blockage on the only access road to and fro our communities.
The situation as you can see is reminiscent of Apartheid South Africa, probably because the managing director of OOPC is a South African National.