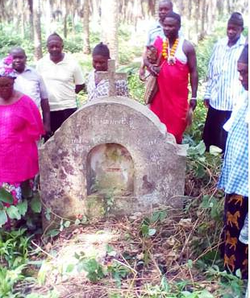 Traditional authorities of Mbonjo, a village located in Moungo division of the Littoral region, say they have taken enough from SOCAPALM (Société Camerounaise de Palmeraies), whom they accuse of defiling their cultural heritage and landgrabbing.

They came out in unity over the weekend, to cry foul over the activities of the palm production company which, they said, had brought more tears than joy to the communities which host the company.

In a purely traditional outing, the Chiefs demonstrated their contempt against SOCAPALM whom they said has not only taken their land but has also desecrated the cultural heritage of the land.

According to these Chiefs, SOCAPALM has covered the graves of their forefathers in the palms. One of them, His Majesty Martin Saah, said the Mbonjo Community is a typical agricultural setting that depends on subsidence economy for survival and can no longer survive because not only have their land be expropriated but they have been denied their source of survival.

They made a call to the Head of State, President Paul Biya, to assist them regain their land from the contract signed by government in 2000 with SOCAPALM where they revealed initially SOCAPLAM bought 78,0000 hectares of land and in 2005 it was agreed that 20,000 hectares be given to the indigenous population. They said SOCAPALM violated this "Gentleman Agreement" and has gone as far depriving the local population of their source of income. 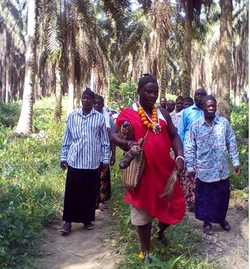 The Guardian Post gathered that even the workers of SOCAPALM are disgruntled because after several hours of work they are paid only 650 FCFA daily and also that even natives who pick stray nuts for food are either arrested or molested by armed officers. The chiefs at the time of this report are calling on the head of state to assist them regain their land.

For the past years, few Chiefs whose communities host parts of SOCAPALM plantations, had stood up on reports of land-grabbing carried out by the company. Local farmers, who are a minority of shareholders in the company, had also confronted the company in several outings.

SOCAPALM plantations have been a source of massive socio-ecological problems and resistance in the past years. The plantations were established by government in 1968 on land customarily belonging to Bagyeli and Bantu populations. In 2000, the plantations were privatised and they belong today to the Luxembourgian holding, Socfin, which is linked to the Bolloré Group.

In 2013, an action plan was signed between Bolloré Group and some ten NGOs defending the rights of communities on the issue of palm oil production in Cameroon. It was intended to improve the living conditions of residents and workers of SOCAPALM. However, six years later, Bolloré Group is accused of never having respected its commitments. Local producers have been staging strike actions against the company, which they accuse of failing to respect terms of the agreement. The group was accused of water pollution, inequitable distribution of wealth and land-grabbing.

These concerns grouped a number of Cameroonian Non Governmental Organisations and some based in France against Bolloré Group and took the matter to a French court. "We are asking the French judge to compel the Bolloré Group to fulfill its commitments made in 2013 to neighbouring communities and workers on the plantations of SOCAPALM, a palm oil exploitation company in Cameroon directly linked to the group," pointed out the NGOs and unions.

However, the Bolloré Group had rather accused the NGOs of defamation and has since then launched not less than 20 law suits for both the NGOs and the media. 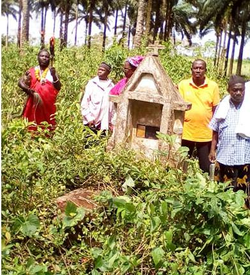 Despite the dead end, the Luxembourgeoise Société Financière des Rubbers, Socfin, published its results for the first quarter of 2019 in May 2019, which indicated that SOCAPALM is a leader in palm oil production in Cameroon and the most profitable in Africa during the said period. In detail, SOCAPALM posted a net profit of 8,898 million euros.

Prior to the arrival of SOCAPALM, the region was covered with a Guineo-Congolese rainforest with an exceptionally rich biodiversity. With the creation of the SOCAPALM plantation, thousands of hectares of lands were removed from local populations’ access while numerous fishing zones became inaccessible to them because of their falling within plantation limits.

From Brenda Kiven and Joel Mukage in Douala