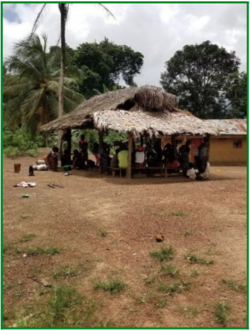 
Timby Factsheet VOL.1
Equatorial Palm Oil (EPO) runs the Palm Bay Estate palm oil concession in District #4 of Grand Bassa County. This concession falls under a 2008 agreement between its subsidiary Libinco (formerly Libinc Palm Oil Inc) and the Republic of Liberia. EPO has an approved Environmental and Social Impact Assessment for 13,962 hectares. Thousands of hectares of palm oil have been rehabilitated or newly planted (since 2014) as part of what the company termed ‘phase 1’ of 8370 hectares. Gmenee village sits right in that new planting area. EPO states it has signed a Memorandum of Understanding with all affected communities, but Gmenee village people say they have not seen such agreement and do not have a copy. There is no information on the number of hectares of land from Gmenee that has been cleared by the company – efforts by the community to get these have not been successful.
East of ‘phase 1’ towards the Timbo river, an expansion area called ‘phase 2’ of another 4637 hectares holds richly forested lands and is home to the Joghban clan who have successfully resisted further encroachment of EPO on their land for years. This included an intervention from Liberia’s former president and a grievance process that culminated into an agreement and participatory mapping process in 2016. However, EPO still intends to expand in the phase 2 areas according to resource persons in the villages around the plantation. Several communities inform SDI that EPO is continuously intimidating, threatening and dividing communities into signing away their land.