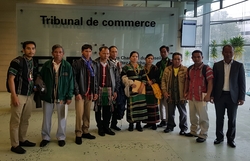 Eleven representatives of the Bunong ethnic group were present in France for a hearing at the Nanterre court. Eighty farmers are suing the Bolloré Group and its subsidiaries, accusing them of having taken over their ancestral lands. Using unpublished documents, they argue that, contrary to its repeated claims, the group managed its plantations directly from its headquarters in Puteaux.

In the narrow hall outside the small courtroom of the Nanterre Regional Court (Hauts-de-Seine) on Tuesday 1 October, the hubbub was annoying. "We're not at the circus," snapped the presiding judge, before regaining her cool and treating all those who crammed into what was no more than an ordinary meeting room with thoughtfulness. Coming to attend what they thought was a short procedural hearing, the lawyers defending Bolloré, its subsidiary Compagnie du Cambodge and its "partner" Socfin, had more difficulty hiding their exasperation at the small happening that was taking place before their eyes.

Packed in the small room, about ten Cambodian peasants and their translators, several journalists and a couple of NGO representatives who managed to sneak in were present, at the invitation of lawyer Fiodor Rilov, not unhappy with its effect.

Known for his defence of workers of many factories that have closed in France (including those of Whirlpool and its short-lived buyer in Amiens), the lawyer has once again managed to attract attention. And to contribute to maintaining what is a small but stinging thorn in the foot of the giant Bolloré: its participation in the management of oil palm and rubber plantations in Africa, but also in Cambodia.

The nine Cambodian farmers who travelled to Nanterre represent 80 complainants suing the Bolloré Group to challenge the way rubber plantations have developed in their area since 2008. Their civil summons was issued in 2015. They are each claiming tens of thousands of euros in damages, but also to be able to return to their land. 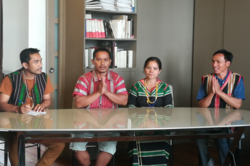 Bunong farmers explain their approach against Bolloré, 30 September 2019. (Photo : D.I.)
Originally from the commune of Bousra, in Mondolkiri province, in eastern Cambodia, they belong to the Bunong ethnic group, a local indigenous population. In that area, the ethnic group includes 850 families, spread over seven villages. The Bunong practice shifting cultivation and have animist beliefs, based on the sacralisation of forests and burial sites of their ancestors. According to the terms of their lawsuit, they "were victims of a real economic, social, environmental and religious disaster, entirely attributable to the companies of the Bolloré group, which deprived them of their resources and destroyed their current environment and places of worship."

Socfin-KCD, the local subsidiary of the Bolloré nebula, began developing rubber monoculture with the agreement of the Cambodian government, which granted it land use. In theory, the French multinational paid the Bunong $200 per hectare of land used. But many claim to have received only a few tens of dollars or even no compensation when they were asked to leave their lands.

The case of the Bunong in Cambodia has already been widely documented. First by the International Federation for Human Rights (FIDH), which published a very harsh report in 2008 on the activities of the Group's subsidiary, Socfin-KCD, in charge of the Cambodian plantations. That report generated a severe reply from Socfin... A documentary film was also made on the subject in 2014 and its co-director, Anne-Laure Porée, spoke well about it in the Swiss daily Le Temps.

Cambodian residents of the Bolloré Group's plantations are far from being the first to challenge the way they are treated. Mediapart has already largely recounted the demands of the international alliance of peasants from Cameroon, Côte d'Ivoire, Liberia and Sierra Leone that was created to protest against the French group. The Group, or its various subsidiaries, is very sensitive about this issue. Among other actions, it filed a libel lawsuit against Mediapart and two NGOs, which it definitively lost.

Yet, in both Asia and Africa, activists are the bearers of demands that the Group is well aware of, for example, as laid out in an open letter that was hand-delivered to Vincent Bolloré in June 2013. "A few years ago, we used to perform rituals in the forest with wild animals, it was our daily life. We cultivated the land, we picked fruit in the forest," said Kroeung Tola, one of the Bunong present at a press conference, who had to postpone their visit because they could not get visas in February. The farmer explained that the indigenous people have filed several complaints with the Cambodian authorities to no effect. "We hope and believe that the justice system in France will be more independent," he argued.

"This company came to invest in my village, but they did not respect the law. They launched their project before reaching consensus throughout the village," Soang Prou insisted. "I demand my land back."

Documents implicating the involvement of Bolloré

This powerful request, launched by some with barely contained emotion, was not the subject of Tuesday's debates at the Nanterre court. The hearing on the merits will not take place for a year at the earliest. The lawyers for both parties were in fact meeting to demand, each on its own, the production of documents which they consider necessary for the proceedings.

Expressing all his "exasperation" towards his colleague Rilov, who he said takes every opportunity to transform "hearings into media sounding boards", Olivier Baratelli reiterated the demands of the three lawyers defending the various companies linked to Bolloré. The Group's historic lawyer, who is defending the Compagnie du Cambodge, one of its largest subsidiaries, has been calling since 2016 for the plaintiffs to produce complete and certified identity documents, but also, and above all, documents proving that they have the right to own or enjoy the land they claim they have lost.

"It's the minimum," says Dominique de Leusse, who defended Socfin. He recalled that he was waiting for the documents provided by the Bunong to specify, in particular, the "exact area" and "location" of the land that is at the centre of the conflict. This is what the court has been asking the first plaintiffs to do since February 2017, with some 50 others having joined the lawsuit since then. If these documents are not made available, Bolloré and his allies demand that the proceedings be terminated.

Such requests may sound simple, but they pose a serious problem for the Bunong, who do not all have identity documents and have occupied their lands in a traditional way for decades, without formal ownership titles as understood under French law. However, they have promised, through their lawyer, that they will provide all the necessary documents in the coming months.

The requests of the Bolloré group may sound simple but they pose a serious problem for the Bunong who don't all have identity documents and occupied their lands tratitionally, without formal titles. (Photo : GRAIN)
For his part, Fiodor Rilov asked that many documents linking the Bolloré Group to its subsidiaries or partners in charge of plantations be made public, in order to clarify once and for all their relationships. The lawyer already has several documents showing that his demand could create a serious crack in the Group's traditional defence.

Indeed, Bolloré has been repeating consistently for many years that it has not been involved in the actual management of the plantations held by Socfin, even though the French company is a top shareholder with 38.7% of the capital. "Bolloré SA has strictly no connection with this case," Olivier Baratelli argued again on Monday in a reply to AFP, assuring with the utmost seriousness that this is a "strictly Cambodian problem".

On paper, it is indeed the head of Socfin, Hubert Fabri, who controls the rubber trees and oil palms ever since he shared with Vincent Bolloré the (considerable) remains of the former Rivaud colonial group, which was taken over by the French industrialist in September 1996 (read our detailed account here). But, in truth, the two men still maintain close relations: Fabri has been a member of various bodies of the Bolloré Group since 1987 and Bolloré remains, alongside a second representative of his Group, one of the six members of the Socfin Board of Directors, which also includes Hubert Fabri and his son.

To counter this well-established argument, Fiodor Rilov obtained the activity reports from 2007 to 2011 of a company called Terres Rouges Consultant. The company was dissolved on 31 December 2012, but it was housed directly in the Bolloré tower, the group's headquarters in Puteaux (Hauts-de-Seine). Its activity declared at the beginning of 2008 was explicitly "the management of Socfin-KCD, a company incorporated under Cambodian law, with the objective of creating 15,000 ha of industrial rubber plantations in Mondolkiri in eastern Cambodia."

The activity report also indicated that Terres Rouges Consultant "manages three agro-industrial companies in Cameroon (Socapalm, SPFS, Safacam)," i.e. the Cameroonian plantations owned by Socfin and over which Bolloré has always denied a direct management role. This short sentence allowed Fiodor Rilov to announce that nearly 200 Cameroonian farmers claiming to be victims of Socapalm would be joining the lawsuit in the coming weeks.

The Bunong's lawyer also discovered that Vincent Bolloré himself was a Terres Rouges Consultant administrator and that he was none other than the "Director Number Two" of Socfin-KCD in Cambodia. Additionally, the Number Two of Terres Rouges Consultant was Bertrand Chavanes, the man who presented himself as the manager of the Bolloré Group's plantations, before retiring several years ago.

For Fiodor Rilov, there is no doubt: "Terres Rouges Consultant served as a vehicle, housed within the Bolloré tower itself, for the Group to ensure its effective management of the plantations in Cambodia." It is in this capacity that the Group and its various entities are being sued in civil court by the Bunong. And to bolster his argument, the lawyer demanded that the lease under which Terres Rouges Consultant occupied its premises at Bolloré's headquarters, as well as the list of its employees, the list of its directors, the company accounts, as well as any evidence of contractual or capital ties connecting it with the Bolloré Group, be made available.

The court will issue its decision on these demands of the parties on November 6. Then we will know if the little thorn in Bolloré's foot will continue to bother him for a while longer.