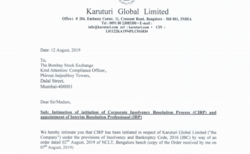 India's largest producer of cut roses initiates insolvency proceedings
Insolvency proceedings initiated against Karuturi Global which has outstanding debt of ₹86 crore
Corporate Insolvency Resolution Process (CIRP) has been initiated against Bengaluru-based Karuturi Global, one of the world’s largest producers of cut roses.
Karuturi Global owns large rose farm holdings in Kenya, Tanzania, Ethiopia, Pune and Bengaluru, and grows over 555 million stems of roses a year across 300 hectares.
In a stock exchange filing, Karuturi Global announced that CIRP has been initiated in respect of the company under the provisions of the Insolvency and Bankruptcy Code by way of an order dated August 2, 2019 of the National Company Law Tribunal (NCLT), Bengaluru bench. Karuturi Global managing director Ram Karuturi was not available for comment.
Karuturi Global’s affairs, business and assets are being managed by Ghanshyam Das Mundra, the Interim Resolution Professional (IRP) appointed by the National Company Law Tribunal, the company said in a stock exchange filing.
Karuturi Global has outstanding debt of over ₹86 crore in loans taken from Axis Bank. Under the new development, Karuturi Global has been prohibited from transferring, encumbering, alienating or disposing of any of its assets.
On an average, India ships over 100 million stems of red roses to markets including the U.K., West Asia, Australia, China and Netherlands.
More than half of these roses are produced by Karuturi Global.