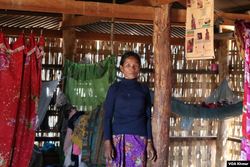 KAK VILLAGE, Rattanakiri Province — Lmam Pjanh recently sat on a mat in her simple wooden house and recalled the times when Kak Village, situated in a bend of the Sesan River, was a place of plenty.

Until the late 1990s, she said, the ethnic Kachork village in the rolling hills of Cambodia’s remote, northeastern Ratanakkiri Province was surrounded by thick forests in which the villagers would create clearances to farm dry rice and let their animals graze. Nearby, small streams and the Sesan teemed with fish.

Their intimate knowledge of the forest allowed the Kachork to hunt and to collect numerous edible or practical products. They practiced their animist beliefs at burial sites, ’spirit mountains’’ and other spiritually significant natural sites.

These days, the Kachork’s ancient way of life has been all but wiped out by the rapid spread of rubber plantations, hydropower dams and logging by Cambodian, Vietnamese and Chinese companies across Ratanakkiri.

Kak Village was one of 12 ethnic minority villages in Andoung Meas and O’Chum Communes, comprising 1,368 households, who complain their ancestral forests and land used for swidden farming were grabbed by HAGL’s Cambodian subsidiaries when they received a 50,000-hectare economic land concession for rubber from the government in 2009.

“I am not happy like before. Before the forests were good, [now] I don’t [even] have wood” to repair the house, she said. Her extended family of 11 includes six children, who all live in a large, rundown house on stilts.

During the interview, her 8-year-old daughter returned from school and Lmam Pjanh warmed up a thin soup with bits of fish and vegetable for her. “The fish was given by my relatives and I cooked it. We barely have enough food for our daily living,” she remarked as she stirred the pot.

Recently, after a decade of hardship, the villagers scored a significant victory when some of their demands for restitution were accepted after they put pressure on the World Bank Group over its financial ties to the HAGL.

In March, Rattanakiri Province authorities agreed with HAGL to cut out 64 disputed areas - around 742 hectares - including ‘spirit mountains’, wetlands, traditional hunting areas and burial grounds to the 12 affected communities after years of dialogue and negotiations, according to Equitable Cambodia.

The NGO assisted the villagers and in a statement hailed the decision as “an unprecedented recognition of indigenous land rights over business interests in Cambodia.”

Sev Seun, a community representative from Kak Village, said the villagers were relieved they will regain sacred lands and sizable parts of their farmlands, though years of intransigence on the part of the government and HAGL has tempered expectations.

“We don’t know if the lands for crops will [actually] be given. Perhaps we get only 40 percent of what we had before,” he said, adding that the villagers were waiting for information from the authorities.

“The community is a bit happy, but life will not be like before,” he said, adding that villagers wanted restitution of their lands, forests and water sources with legal title and enough to make a decent living again.

“Now all sides are waiting the decision from the minister. We want to solve the problem by involving both the company and villagers,” he said, adding that legal procedures have to be completed before the lands are returned.

Agriculture Ministry spokesman Srey Vuthy and HAGL could not be reached for comments.

Large-scale land grabs by companies with connections to the long-ruling Cambodian People’s Party have proliferated across rural Cambodia since the early 2000s, affecting hundreds of thousands of lowland Khmer farmers and thousands of indigenous villagers in the Northeast.

The groups - also called Montagnards or Khmer Loeu - number several dozen and are estimated at some 190,000 people, out of Cambodia’s 16 million population.

Some of their communal lands and forests are legally recognized, but most have proven highly vulnerable to land grabs and logging. Their complaints and protests often last years and rarely result in adequate compensation or return of land.

In the HAGL case, Equitable Cambodia assisted the Highlanders Association and the Indigenous Rights Active Members of Cambodia in filing a request in 2014 for a dispute resolution process with the independent watchdog of the World Bank’s International Finance Corporation (IFC).

It deals with complaints over social and environmental safeguards’ violations.

The villagers’ complaint is related to the IFC investment in Dragon Capital’s VEIL fund, which bankrolled HAGL’s agribusiness ventures in Cambodia and Laos, Equitable Cambodia said.

The NGO said in March that it also helped villagers file a second complaint because HAGL pulled out of the mediation process before reaching a final agreement with them on issues of land and water rehabilitation and compensation for damages.

The latter complaint is based on IFC’s decisions in 2016 and 2017 to buy equity stakes totaling US $125 million in two other Vietnamese financial institutions, TP Bank and VP Bank.

“The banks then went on to provide financing of more than $200 million dollars to HAGL, specifically to fund its rubber plantations in Cambodia, despite the pending [2014] complaint” against the IFC, Equitable Cambodia said.

‘Land for my children’

Both Lmam Pjanh and an elderly villager named Kasol Met, 73, said they hoped enough land would be returned so they could live off farming again and later leave the land for their children so they can avoid a life of poverty.

“I used to farm rice. I can’t be a [rubber plantation] worker because I am old already,” Kasol Met said.

Lmam Pjanh added, “I am afraid that I don’t have land to leave for my children. If we have land, we can grow cassava, cashew and rice and then [we] are happy.