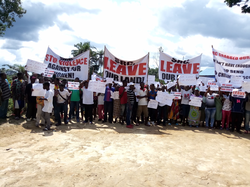 SRC and LAC hold concessions of more than 128,000 hectares in Liberia but the operations of the two companies have been characterized by reports of gross human rights violations; land gripping, sexual harassment, violation of customary and international laws, forceful eviction of whole communities, devastation of crops, sacred spots and water sources with little or no compensations to project affected communities.

In what they described as “Peaceful Mass Action” the aggrieved SRC project affected communities converged on May 27, 2019 in Kuwah-ta, Kpatolee Clan, Salala District,  Bong County to express their indignation over the extreme cruelty  being meted out against them in their own ancestral  land by the company, SRC.

The one day event which also brought together representatives of LAC’s project affected communities from Grand Bassa County afforded the  aggrieved citizens the opportunity to narrate horrible  accounts of how they are been treated by the two companies owned and operated by a Luxembourg based rubber company, Socfin.

The aggrieved citizens, including women, children, the elderly and youth groups held and displayed placards with various inscriptions but in one accord detesting the encroachment of their land and various forms of violations by the SRC and LAC.  The ceremony was hosted by Yeabamah National Congress for Human Rights (YNCHR).

According to the citizens, SRC and LAC did not buy their land but forced it from them, “give our land. We want our land” SRC should leave our land because; this is the only palace God gave us. This is the only land we have to plant our crops but it is being taken away,” these were some of the wording displayed on some of the posters.

In separate statement delivered on behalf of the affected communities by Abraham N. Kamara, General Chairman of the Yeabamah National Congress for Human Rights (YNCHR) and Deputy Chairlady, Lorpu Penneh, the embattled residents called on SRC and LAC to respect their rights to their lands because the companies and the communities did not sign any agreement to take over their lands.

They called on the companies to pay for all their crops damaged during the invasion of their ancestral lands, according to them, the payment must be done through their lawyer, Green Advocate International.

In the statements, the women also exposed the inhumane treatment, including sustained sexual harassment, abuse and intimidation which they are subjected to at the hands of plantation managers and officials.

The affected communities recognized the significant intervention of Cllr. Alfred Brownell of Green Advocate International, the Alliance for Rural Democracy and other rights based groups who have taken interest to highlight their plights and represent their legal interest.

Meanwhile, when contacted for comment, SRC’s Human Resource Manager, Jallah Mensah refuted the claims of the affected communities; according to him, the areas being occupied by the plantation are areas granted to the company under the concession agreement it signed with the Liberian Government since 1959.

Although Mr. Mensah told reporters that SRC is operating in accordance with Liberian laws, he failed to confirm whether SRC has any written agreement with the locals whose ancestral lands are being reportedly encroached on by its operation.