What justice for local communities affected by SOCFIN plantations? 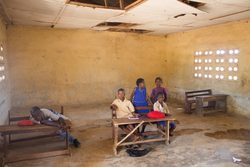 What justice for local communities affected by SOCFIN plantations?

An action of solidarity with the communities affected by SOCFIN's plantations in Africa and Asia was carried out in Luxembourg today during the multinational's General Assembly. About ten activists participated in the GA to denounce the situation and demand immediate action. "Voluntary self-regulation by corporations leads nowhere. States must adopt laws to regulate companies based in Europe," explains Marine Lefebvre, spokesperson for the Luxembourger NGOs who participated in the action. On the same day, Swiss NGOs mobilised in front of the new SOCFIN offices relocated to Fribourg, relaying the message: "SOCFIN, we are watching you! ».
This transnational mobilisation of civil society organisations from Belgium, France, Switzerland and Luxembourg aims to denounce the double discourse of company directors who do not respect their commitments and deny the social and land conflicts raging in almost all the Group's rubber and oil palm plantations. "The aim pursued by the activists was to directly question the directors and shareholders present at the GA and to echo the demands of  hundreds of thousands of people affected by SOCFIN's activities. The position carried publicly by SOCFIN, and included in its annual Sustainable Development Report, does not reflect reality. It was our duty to prove it," says Florence Kroff, spokesperson for the Belgian NGOs.
At the same time, several of these organisations are turning to the courts to enforce commitments already made. Yesterday, a summons to appear before the Nanterre Regional Court was handed to the Bolloré Group, the second largest shareholder of the SOCFIN Group. This unprecedented legal action aims to force Bolloré S.A. to implement an action plan to which it had committed itself towards the communities affected by SOCFIN's activities in Cameroon.
Unsatisfied promises and criminalization of human rights defenders
Two years after SOCFIN adopted a new "responsible management policy", local communities have not seen any real progress on the ground -- and worse, the situation is deteriorating. In Sierra Leone, for example, the conflict between the company and local communities escalated again in January 2019, leading to the death of two people, the arbitrary arrest of 15 activists and the forced displacement of hundreds of residents. In Liberia, too, the situation is worsening, especially for women: more and more cases of sexual harassment and abuse are reported in plantations, often committed by guards or managers of third party associates.
These abuses and other negative impacts of SOCFIN's activities have been widely documented in two recent reports analysing the situation on plantations in Sierra Leone and Liberia. A transversal report on the commitments not met in dozens of SOCFIN plantations in four different countries is also being published today. The action at the SOCFIN General Assembly was an opportunity to present these reports to the company's directors and shareholders. The list of abuses suffered by people living near plantations is long: land conflicts, violence against women, deprivation of forest resources, polluted rivers, poor compensation, precarious working conditions, unfulfilled promises of dialogue, unfulfilled social projects, food insecurity, serious criminalisation of community defenders, etc.
Binding standards to ensure respect for rights
The organisations denounce the inefficiency of corporate self-regulation and the lack of binding public rules for multinationals. Indeed, the case of SOCFIN illustrates the negative impact that transnational companies can have on local communities and the environment. Although these crimes take place elsewhere, SOCFIN's subsidiaries are managed from Europe. Four States are directly concerned: Belgium (the majority shareholder being Belgian), Luxembourg (country of domicile of its headquarters), France (through Vincent Bolloré's 39.4% shareholding) and Switzerland (where SOCFIN has several operating companies). All have an obligation to protect human rights by preventing and/or remedying abuses committed by SOCFIN. The signatory organisations in Luxembourg, Belgium and Switzerland call on their governments to impose a duty of vigilance on companies, as France did in the so-called Rana Plaza Law of 2017. This includes making corporate responsibility a reality by ensuring access to justice for those affected.
In addition, the organisations claim the right to freely hold a transnational company liable and to contribute to the public interest debate on the conditions under which companies operate abroad. "The lawsuit against Bolloré should be an important step in empowering economic actors. The company cannot unilaterally free itself from its commitments, nor use them for the sole purpose of buying social peace or an ethical veneer," concludes Marie-Laure Guislain, Sherpa's head of litigation.
Signatory organisations
Belgium:
AEFJN
CNCD-11.11.11
Entraide et Fraternité
FIAN Belgium
France:
ReAct
Confédération paysanne
International :
GRAIN
Luxembourg :
The 16 organisations of Initiative pour un devoir de vigilance – see list here
The 22 organisations of the Plateforme Meng landwirtschaft – see list here
Suisse:
Attac Fribourg
Bread for all
FIAN Switzerland
Multiwatch
Solifonds
Press contact :
Note to the editors: