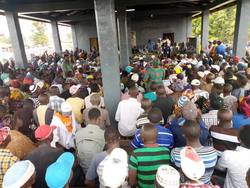 The Government of Sierra Leone had kicks-off investigations into the continuous and mounting disputes among landowners on how thousands of hectares of lands were taken away from them in Malen Chiefdom, Southern Sierra Leone in Pujehun District by the former administration of former President Ernest Bai Koroma and handed over to the Luxemburg, Socfin Agricultural Company without alleged proper negotiation from the Community people.

The Technical Working Committee to investigate and resolve the long land conflicts in Malen Chiefdom Pujehun district was officially presented by the Resident Minister South on Saturday March 23rd 2019. The Technical Committee investigating the land issues is also comprised of the Deputy Attorney General and Minister of Justice, the Independent Candidate of Constituency 104 in the name of Hon. Siaka Musa Sama, Paramount Chief Brima Kebie, MALOA representatives, Traditional Authorities, Community Representatives and the Secretary to the Vice President and to the Technical Committee, Mr. Baba Fortune. The mandate of the Committee is to look into the land conflict in Malen Chiefdom and make recommendation to the Vice President as a supreme Head of the investigation who will in turn submit such recommendations to President Julius Maada Bio.

While making a brief statement on Saturday during the start of the process, the Residents Minister South, Mohamed Alie informed the gathering that the Technical Working Committee was set by the Vice President, as was instructed by the President to investigate and find a peaceful resolution to the Malen land conflict.

The purpose of the meeting was to inform the people about President’s desire to resolve the conflict in Malen and to promote Agricultural business which had caused the President to setup Mediation and Technical Committees to support the mediation with facts about the conflict in Malen. The Chairman of the Technical Committee told the gathering that they have already accessed all documents from the parties involved in the land conflicts.

The Committee Chairman reechoed that, “Civil Society is not part of the working group” because according to him they have already taken side in the conflict but the Executive Director of Green Scenery, Joseph Rahall said in as much as their mandate is clear as to always be in support of vulnerable communities, they could not wish to be part of the mediation committee but rather had wanted the government to include other human rights civil society groups to be part of the the process.

Over the years, the government through then then Chief of staff, Conton Sesay had established a mediation team to settle the land conflict in Malen Chiefdom but all these efforts had failed due to either the previous government not willing to act or ready to settle the problem. “We are not overwhelmed with this recent committee” Rahall said.

While expressing skepticism and optimism of the process, Rahall said “the setting up of the Technical Working Group or the Technical Working Committee is not strange to Green Scenery simply because it was established also by the previous government under the reign of the then Chief of Staff, Mr. Conton Sesay and the repetition of it cannot be strange to us at all due to the fact that the previous efforts or work was stagnated due to lack of political will to do so”. He said “being that the the New Direction government under the leadership of retired Brigadier Julius Maada Bio, we hope they will do things differently which they will have to account for”.

During the first meeting, it was agreed that ‘the outcome of the meeting and visitation to sites and communities to be communicated to the Vice President, investigate all stakeholders and parties to the conflicts, make commitment to seek the truth and the facts about the conflict”. As part of considerations to the ongoing process, it was suggested and agreed that all the Malen Landowners and Users Association detainees should be released, court case dropped as well as encourage the Malen people who have fled to return back to their various Communities without threats and intimidations as well as lift the current curfew in the Chiefdom.

However, Socfin Agricultural Company is very happy for the investigations. The Country Manager of SAC Gerben Haringsma told Standard Times that they ‘heavily support the Government doing the investigation as to get rid of all unfounded acquisitions on our lease not being valid or legal, on the size of the land to stop the land grabbing acquisitions”. He went on to say that “people where incited with wrong facts that are now going to be cleared”.

Mr. Gerben further hoped that “we expect that with all these facts, it will lead to the end of incitement by certain politicians and NGO’s and we will live in peace with the population and will take the ammunition away from all those politically motivated distractors”.