How not to conduct large-scale agricultural investments: Lessons from the Malen/Socfin Land dispute in Sierra Leone 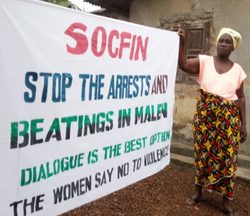