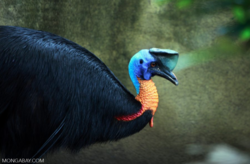 The stocky, flightless northern cassowary (Casuarius unappendiculatus) is one of the birds-of-paradise for which Papua is famous. (Photo: Rhett Butler for Mongabay)
Mongabay | 25 June 2018

Posco Daewoo is owned by one of South Korean’s largest conglomerates.

Dutch national pension fund APB is divesting 300,000 euros ($351,000) from Korean firm Posco Daewoo over deforestation in Indonesia’s easternmost Papua province.
The announcement by ABP follows a series of media reports in the Netherlands about forest destruction by PT Bio Inti Agrindo, an oil palm plantation company owned by Posco Daewoo.
In May, consumer television program Kassa — the name means “cash register” in Dutch — aired a 16-minute segment on the pension fund’s investment in Posco Daewoo. That same month, the Dutch website Oneworld.nl published its own exposé of the land clearing in Papua.
Environmental groups have campaigned against the deforestation in Papua by Posco Daewoo, and by other companies, for years. The palm oil industry is rapidly expanding there.
In 2015, Norway’s pension fund divested from Posco Daewoo —then named Daewoo International — and from Posco, the parent company.
APB still has a 157 million euro ($183 million) investment in Posco.
“Norway got it right — Posco’s massive deforestation and land grabbing isn’t something to play games with,” Rolf Schipper, forest campaigner at Milieudefensie, a Dutch group, said in a statement. “If ABP wants to be seen as a responsible trustee of Dutch resources, they have to stop financing rogue actors like Posco, period.”
The land PT Bio Inti Agrindo has been licensed to develop by the Indonesian government overlaps with a WWF Global Ecoregion home to 344 registered bird and 69 mammal species, some of which are endangered and endemic to the area.
PT Bio Inti Agrindo has cleared more than 200 square kilometers (77 square miles) of forest in Papua since 2013, according to a report released by think tank the World Resources Institute in March.
Original source: Mongabay
TWITTER
FACEBOOK
WHATSAPP
PRINT
E-MAIL
TWITTER
FACEBOOK
WHATSAPP
E-MAIL