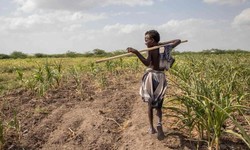 The board of Oromia Investment Commission (OIC) has approved 167 investment projects worth 5.37 billion Br. Over 81pc of them are in agriculture and agro-processing sectors.
The board has been approving the projects for the past five months. Within the past two weeks, the OIC has granted licenses and plots for the investors who deposited 30pc of the project cost.
"Due to the country's unstable situation, the investment sector was facing dangers," said Kuma Daba, director of projects at the OIC.
The Oromia Regional State was in massive protests and violence, for the past two years. Due to this, various businesses were vandalised by protesters which led foreign investors to abandon their investments and leave the country.
Vandalisation included a 70ha corn farm that belongs to ELFORA Agro-Industries Plc, which was one of the businesses that felt the heat as protesters burned down the farm. The protesters in the region also burned cement company vehicles and trucks, for instance, that of Habesha and Dangote cement factories. Saygen Dima Textile, which was owned by Turkish investor, as well as different flower farms burnt during the protest.
Out of the total new investment licenses, three of them were granted to non-nationals. The remaining investments are possessed by local investors, of which 36 of them are farmers and two small and micro enterprises.
The service sector has the lowest share of six licenses, while 19 investors took license to engage with manufacturing. Agro-processing and agriculture get the highest share of 96 and 46 licenses, respectively.
Although most of the investors requested plots near Addis Abeba, the large sum of the approved investments reside in Jimma and Wolga as the Commission offered them different benefit packages, according to Kuma.
One of the investors whose project was approved by the board recently is Elias Fadlu, member of Ethiopian diaspora. He is setting up water purifying and bottling plant in Holeta, in the Oromia Regional with 61 million Br investment.
Elias's investment license gets approval after a three-year-long process.
"Unnecessary bureaucratic steps made the process sluggish," he told Fortune.
Haile Fufa, an investment projects review expert of OIC, attributes that the delay is caused by a capacity problem at zonal and wereda's qualification.
"The investment committees at zonal and wereda levels are not holding meetings at the scheduled time," Haile told Fortune. "This is causing delays."
Henok Assefa, a managing partner at a local investment consulting firm, Precise Consult International, believes that investors are getting their confidence back; as they are recovering from the panic caused by the country's recent political situation.
"Peace, security and stability in any country are the first key issues for the investment sector," said Henok.
"Businesspeople are investing their money. Thus, they need protection to feel safe and secured."
So far, there are over 761 investment projects in the region with a capital of 3.4 billion Br. These projects provide employment opportunity for 51,728 employees. Additionally, the region accounts for 51.2pc of the crop production, 45.1pc of the area is under temporary crops and 44pc of the total livestock population of Ethiopia.