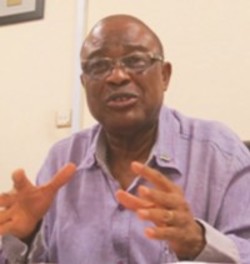 The Minister of Agriculture Forestry and Food Security Prof. Monty Jones has called for a review of the flawed 50 years land lease agreement signed in 2011 between land owners and Socfin Agriculture Company for a win-win situation in Malen Chiefdom Pujehun District Southern Sierra Leone.

“The land was leased for US$5 per acre which is the lowest in any part of the world” the minister told AWOKO in an interview at his Youyi Building office in Freetown on June 7, 2017.

He said “we need to review the land lease agreement to meet an acceptable standard for both the land owners and the investor.”

Prof. Monty-Jones said currently negotiations are ongoing with land owners, local authorities and the Socfin Agriculture Company for an amicable solution to the problem.

The Minister further disclosed that the US$5 paid for one acre of land is very disproportionate to the value which the landowners used to derive from farming on the land.

He called for an agreement wherein the company pays back to land owners on profits accrued from the investment periodically, so as to promote a sense of ownership between the investor and locals.

The Minister said any future land lease deals with land owners across the country needs to take into account the welfare and wellbeing of the locals whose livelihoods depends on the land for their survival.

He stated that, they wanted a smooth business operation between foreign investors and locals, so government took the people’s lands from them on lease and later subleased the land to Socfin.

He also explained that it was the Government of Sierra Leone who determined that 50% of the land lease payment should be given to the landowners, 20% to the District Council, another 20% to the chiefdom and 10% to government.

“That’s the arrangement we have, to make sure that the people don’t disturb the investors,” the Minister said.

Chairman of the Malen Youth Development Association (MAYODA) Mustapha Fofanah said the Socfin plantation covers some 58 villages in the Malen chiefdom and only four villages refused for their land to be leased.

The Paramount Chief Victor BVS Kebbie II also a Parliamentarian was the major negotiator in the land lease agreement on behalf of the people as custodian of the land by law.

The Chairman of MAYODA said “we the landowners had no lawyers to help us independently interpret the land lease agreement,”

The entire deal was done in a rush, as many landowners just signed at a meeting without knowing the content of the documents, after section, town and village chiefs spent a week in Freetown in a luxury hotel, the Chairman of MAYODA Mustapha Fofanah said.

He said Socfin built houses, provided cars and also electrified the houses of some of the chiefs in the Chiefdom, whilst landowners were given a paltry sum for their land.

Copies of the land lease agreement Fofanah said, were shrouded in secrecy, “they only brought us plenty of money in bags at the community center during a chiefdom meeting and started to share the money to landowners on a table in the full view of security personnel with guns and people were told to sign.”

Green Scenery a Non-Governmental environmental advocacy group has been defending land rights in the district for many years now, its Executive Director Joseph Rahall says livelihood issues for the land owners was not favorable in the Socfin Land lease agreement.

He says the chiefs including the Paramount Chief are merely custodians of the land, “not the rightful owners.”

Rahall said many landowners, did not understand the “agreement”. He called for renegotiation of the land deal to address some of the gaps in the agreement by providing sustainable livelihood for the landowners.

The General Manager of Socfin Agriculture Company Philip Tonks while responding to the accusation said a 21 days ultimatum was issued recently to the company and they are working closely with land owners, workers and local stakeholders to resolve the impasse.

Socfin he said is willing to renegotiate with landowners and workers in a bid to avoid unrest.

The company has constructed an oil mill with processing capacity of 30 tonnes per hour with further plans to up the capacity to 60 tonnes per hour in the near future. Production started in 2015, both domestic sale and export is progressing.

Socfin operates in 9 other countries in two continents and have developed and in­troduced new technologies in palm production, which have been incorporated in the Pujehun-Malen project.

Relations between the company and the people of Pujehun continues to worsen despite the fabulous package of its corporate social responsibility that border around the construction of roads, providing social amenities like tap burn water, implementing and helping farmers to improve on their farming schemes as well as providing schools support and scholarships to indigenes.

The General Manager, Philip Tonks said, “the overall image of the company is being misunderstood and expressed the need to strengthen their relationship with the communities through the employment of liaison officers to dialogue with the people.

Chiefdom Speaker of Malen Chiefdom Shegbeh Robert Moiguah sitting on a plastic chair under his hut adjacent his newly built and electrified house near a community football field with a bar and restaurant, said “mistakes were made in the lease agreement, but we needed development at that time when Socfin intervened,” he told Awoko at his village in Pujehun.

“Since the end of the war the chiefdom had not grown, but with the emergence of the company prospects have been bright and business is thriving.” Chiefdom Speaker Shegbeh Robert Moiguah said.