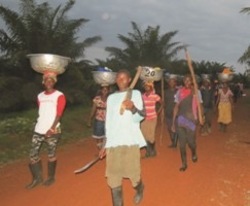 21 days ultimatum for Socfin Managers
The Malen Youth Development Union (MAYODA) on 20 May 2017 issued a 21-day ultimatum for the General Manager of Socfin Agriculture Company, Philip Tonks, and the Plantation Manager, Gordon Peterson, to be transferred, before the 9 June 2017 due to abuses meted against workers of the oil palm plantation and failure to fulfill development promises.
MAYODA is an advocacy and mediatory group endorsed by chiefdom stakeholders advocating for favourable treatment of land owners and workers.

Mustapha Fofanah, a middle-aged man, is the Chairman of MAYODA and also Town Chief of Jonbo village just a few metres from the concession area of Socfin by the ‘green belt’, a patched forest surrounding a village with vast palm trees, leaving land the size of two football stadiums for locals to eke a living.

The Chairman of MAYODA said, “this is the second complaint letter we have written to the company and other stakeholders about the grave abuses of Socfin workers especially laborers at the oil palm plantation and issues of unfulfilled development promises for locals.”

“We are relentless on this 21-day ultimatum this time around. They must go for our people to get freedom on the land,” clutching his fist and punching the air in anger.
He said labourers on the oil palm plantation are harassed, molested and also exploited by Socfin Agriculture Company, majority of whom are vulnerable poor men and women whose land has been acquired by the company.

He said 80% of the sixty villages where the company operates have not received 20% of the development projects promised them when their land was leased in 2011.

On 22 May 2017 a peaceful and successful protest was held against the company, wherein all the oil palm plantation workers refused to go to work due to the undue harassment, intimidation and abuses by the company bosses.

Conditions of service for Socfin Workers

One of the labourers working on the oil palm plantation whose land was leased at Malen is, Sheku Rogers, at Kassie. His home is a mud hut with thatch set in the midst of bananas, palm and coconut trees and a kitchen garden.

The ground around each hut in the village is bare and damped chickens scratched around the house and a goat tethered under a tree.

The only source of income for Rogers before the company arrived at his village was farming, or they work for each other, and harvest sold for extras of life like sugar and salt, cloths and batteries for his new Chinese LED light as evening lamp.

Rogers said he was able to adequately feed the family, pay for schools fees, medical bills and other basic needs, but currently there is drastic drop in our living standards with seeming indescribable poverty.

Some of the villages, he said, have not changed much, despite the presence of the company. Kids still scuttled barefoot through the village in rags; young girls pounding grain in the shade of a mango tree and old women tending babies, many of the youths have migrated to bigger towns for jobs and a better life.

“Our land no more provides food for us to eat,” Rogers complained, “we are now labourers of the white man; waking up as early as 4:00 a.m. to walk three or four miles to the assembly point of the plantation workers,” Rogers said.

Our supervisors are rude, harsh and intimidating and the white boss is a racist who usually calls us “black monkeys” while in queue to be apportioned with tasks, he lamented.

“We assemble in the morning hours to pray and sing the national anthem and we are giving instructions on what to do by the supervisors. The lack of transport for labourers who walk for three to six miles is troubling at night. Some people hire motorbikes but many others are currently suffering,” Rogers said.

“We arrive at the assembly point without eating food and while working on the plantation, we are not even provided with water and those that get injured are also left to wallow in pain except for those with contracts,” he said.

Rogers claims they are forced to harvest 76 to 85 palm fruit heads a day and slash over 300 palm trees a day for less than Le22,000 per day.

“The tasks given to us laborers are tedious and back breaking,” said Rogers. He uses a stick attached to a blade to harvest the palm fruits whilst others gather and transport the oil palm fruits. Roger’s hands are literally rough with blisters and new cuts.

According to Mamie Lahai, a woman in her 30’s with her husband working for the company, “We the laborers, especially women and adults, spend two to three days to complete one task and we get slightly above Le20,000 which is meant for a day’s work.”

“We are treated like slaves on our land. We leased the land to the investors expecting that our livelihood will improve but today we are suffering wretchedly on our land,” she claimed.

He said the company has made every effort to ensure that women and men working on its plantations benefit from improved living and working conditions.

“Every year,” he said, “Socfin invests a significant budget for the maintenance, renovation and creation of social infrastructures and community services, which includes housing, schools, clinics and roads, so that communities can thrive.”

The Human Resource Manager, said, “People are lazy in some of these villages we operate, you give them task for one day it takes them two to three days to complete,” he said, while responding to frequent phone calls at his office desk.

During the harvest season, “we employ a slightly over 4,000 workers and during the other periods, we have around 3,600 workforce,” the Human Resource Manager said.

“We have employed thousands of men and women from the chiefdom to do brushing, slashing, pruning appliance of fertilizer, and harvesting for a mill that produces 30 tons per hour.”

“We give task to meet our production target, but the people are lazy women do not accept pruning and harvesting jobs and use of wheelbarrows due to useless cultural belief,” he slammed his desk with his fist… we pay them slightly above Le20,000 per task.”

He said a grievance committee is currently investigating issues raised by locals and workers in the 21-day ultimatum grievance letter sent to us in a bid to address some of the issues raised.

Belmoh also said that in advancing its Corporate Social Responsibilities, SOCFIN has, among several other community development projects, developed a Rice Cultivation Scheme of 190 hectares of “boli” land and 282 hectares of in-land valley swamp rice cultivation as well as fish ponds.

Belmoh said no gap has been identified regarding the compliance with IFC’s Performance Standard 5 “Land Acquisition and Involuntary Resettlement” which has been officially recorded by a neutral third party commissioned by the World Bank in its report dated 31 July 2015.

He noted that SOCFIN is aware that it is one of very few multi-national corporations that stayed on and has continued to operate in Sierra Leone during her difficult and hard times, employing and providing for thousands of young Sierra Leoneans, paying huge corporate tax and employees’ insurance contributions.

A report by Actionaid in 2013 recommends: a binding regulatory framework (based on international guidelines for responsible agricultural investment) for foreign investment in farmland that emphasises protection of local people and the environment, limiting leases to 1,000-2,000 ha, and binding compensation for all crops, trees and important resources based on the real value of each over its productive life span. Until such recommendations are applied, the report calls for an immediate moratorium on large-scale investment in farmland in Sierra Leone.

According to a foreign expert working in Sierra Leone, “the only way to stop this abuse of its people is the government to take control and have United Nations observers placed in all major foreign investor companies. It is going to take a long time to break the cycle of violence and cruel behavior learned from the past.”

Also, these company’s abuse of the world standards of living and proper humanitarian treatment can be stopped and improved, if forced to comply by a UN committee and monitors.