Another Socfin convict to be released today 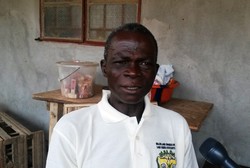 Sima Mattia
Awoko | 16 March 2016
Another Socfin convict to be released today
Sima Mattia would today walked into freedom after barely six weeks behind bars, after his conviction by Justice Desmond Babatunde Edwards at the Bo High Court on February 4 this year.
His release was sought through the collective efforts of Coalition of Civil Society Organizations who had chipped in with the whopping sum of Le30 million to meet his fine imposed by the presiding Judge.
Mattia, happens to be the second victim whose freedom had been sought by the coalition, the first being former Parliamentarian, Siaka Sama.
Speaking to Awoko yesterday, Joe Rahall of Green Scenery expressed his sincere thanks and appreciation to all those who had contributed to secure the release of Sima Mattia.

He emphasized that “we are working round the clock to pay the fines of the remaining four,” and lauded all those who had contributed meaningfully towards the release of the two so far.

However, he continued to appeal to all inclusive of Sierra Leoneans to contribute positively so that they can meet their objective soonest.

The six were jailed on Feb 4 this year after Justice Edwards found them guilty after they were alleged to have destroyed palm plants, property of Socfin in the Pujehun District.

They were also charged for incitement, conspiracy and destruction of over 40 palm plants belonging to Socfin.