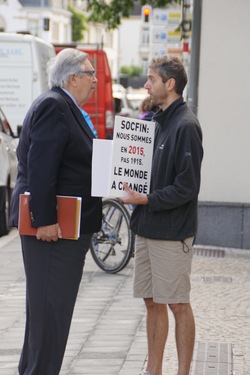 With the support of Meng Landwirtschaft, the Luxemburgish NGO SOS Faim organised an action in front of the hotel where the AGM took place to transmit the demands of the local communities. (Photo: JS)

On Wednesday 27 May, Socfin is holding its general meeting with its two main shareholders present, the Fabri family and the Bolloré group. At the same time, from Cambodia to Côte d’Ivoire, local communities deprived of their lands by the Socfin plantations are mobilised, demanding their rights.

Peasant assemblies oppose the shareholders' assembly in Luxembourg. Today, 27 May, 300 people from six affected villages are gathering to protest Socfin's failure to respect its commitments in Mondulkiri, Cambodia, while 250 representatives of 13 villages affected by the Socfin plantation in Côte d’Ivoire are also mobilising. At the same time, in the Bel-Air Hotel in Luxembourg, the shareholders of Socfin are holding their annual general meeting. The communities are counting their losses, while the shareholders tally their profits. Recently, on 16 May, 300 people gathered at the LAC plantation headquarters in Liberia, while 400 mobilised to blockade the Dibombarri plantation in Mbongo from 23 to 28 April. Everywhere, communities forming the International Alliance of Plantation Communities have the same demands: that Socfin give back the rights to use lands that the communities consider essential to their livelihoods, and that it stick to its commitments to compensate people according to different agreements it has signed on to (see the enclosed state of play and demands).

The Luxemburgish NGOs SOS Faim with civil society platform Meng Landwirtschaft are mobilising in front of the hotel where the general meeting is taking place tomorrow, to transmit the demands of the local communities.

Socfin does not recognise the legitimacy of these movements and their representatives. In their official statement of 12 May (see annex) the company leaders deny that these conflicts exist and insist that their plantations are «vanguards of social progress» and that they «have always acted in peaceful coexistence with the communities surrounding their facilities.» A major shareholder of Socfin (39%), Bolloré initiated a negotiation process in October 2014 but then backtracked. In a statement released 23 April, the company disavowed its responsibility stating that «we are only a non-managing minority shareholder of Socfin Group which, since more than 70 years, is majority-controlled and managed by the Belgian Fabri family» (see annex).

«A model of socially and environmentally irresponsible investment»

«Bolloré cashes in its Socfin dividends all the while denying its responsability», bemoans Emmanuel Elong, spokesperson for the Alliance. «Socfin with its headquarters in Luxembourg, its offices in Switzerland, its shareholders in Liechtenchtein and its refusal to respond to plantation communities is the model of irresponsible capitalism. Against this, we have no choice but to organise ourselves, build alliances and take action to force these business leaders to respect the rights of local communities. We demand an international negotiation with Socfin and Bolloré to draw up a roadmap to resolve the conflicts.» Following the recent mobilisations, Socfin subsidiaries in Cameroon, Cambodia and Liberia have started to recognise the local communities' organisations. But corporate headquarters in Europe continue to deny their legitimacy”.