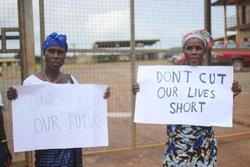 Liberia's Jogbahn Clan is at the forefront of efforts to resist the grab of Indigenous Peoples' land and forests for palm oil plantations. But according to the country's President, they are only 'harrassing and extorting' international investors.

"If we lose our land how will we live? We are in Africa, we live by our crops. Palm plantations can't help us!"

"They refuse to talk to us about our land business. Because we are standing here, are we not people? We are somebody."

His Jogbahn Clan had come to deliver a petition signed in solidarity by over 90,000 people to tell the UK and Malaysian palm oil companies that they must stop grabbing the Clan's land. However the companies refused to speak with the community.

EPO also thwarted efforts to present the petition in London, when they refused a meeting. Attempts to doorstop their London premises proved futile - the office appears to exist only in the form of a brass plate.

A source of inspiration

Even though the companies refused to speak with the communities the story of their struggle is now known all over the world with signatories for the petition coming from across the globe.

Their story has also been a source of inspiration for communities all over Liberia who like the Clan are facing dispossession from their land by agribusiness corporations that will replace their sustainable communities with monocultural plantations to produce certified 'sustainable' palm oil for the global market.

The fight many communities are facing in protecting their land is a fight for their very survival.

These companies are European (UK), Asian (Malaysian, Indonesian and Singaporean) and African (Côte d'Ivoire) with considerable European financing. The focus was on creating a space for these diverse communities to share their experiences.

The same narrative of exploitation is playing out all over the country; the companies' names were interchangeable. Bringing the communities together in this way laid the foundations for connecting their separate struggles.

Chio Johnson offered advice to the other communities, urging them to stay united in the face of the companies' divide and rule tactics. "Land is life, it is too valuable to lose", he warned.

Solomon Gbargee, a youth representative gave a stirring speech recounting the Clan's struggle so far and urged all the communities to stand together in their resistance of the companies:

"If we lose our land how will we live? We are in Africa, we live by our crops. Palm plantations can't help us!"

A solidarity network is formed

Communities impacted by Wilmar's operations described resisting land clearances and the destruction of their property. When they objected to paltry compensation for destroyed crops they were told by their politicians: "If you want to get nothing, take to the streets" - where communities who continue to protest face assault and arrest.

Deyeatee Kardor, Jogbahn Clan's chairlady called on women to lead the struggle. "Because I stood up to the company people accused me of being a man but I carry the spirit of a thousand women", she proclaimed.

"For those of us under struggle with a palm company we must remain strong. My land is my land, your land is your land, your forest and bushes are your bank. Don't get tired. We cannot agree to leave our land."

Communities shared advice and support and these exchanges led to the development of a community solidarity network to provide a platform to work together.

In her ninth Address to the Nation in January 2014 the President of Liberia, Ellen Johnson Sirleaf, characterised community resistance to large scale concessions on their land as "harassment and extortion of investors".

"Agriculture remains the key sector of the economy for local employment creation, poverty reduction, food security and income generation, as over 60 percent of the population depends on this sector for livelihood.

"Food security is listed as a national priority, but we must admit that there has been under-investment by both the public and private sectors. Only massive investment can fix this under-performing sector so that it can play the vital role of delivering inclusive economic growth, environmental sustainability and long-term poverty reduction.

"Our scarce budget resources cannot do this, given the many other priorities, so we will need to attract investment from the private sector. At the same time, the private sector will not respond if there is continued harassment, extortion and unreasonable community demands."

Her statement somehow failed to recognise that investors are primarily interested in the production of export cash crops - which does nothing to increase food security in Liberia. Indeed it achieves the very reverse, as land used for local food production is comandeered to produce commodities for global markets.

The result of community resistance, she later claimed, is to undermine Liberia's economic growth and harm "the renewed confidence that Liberia is still a good destination for investment".

Earlier this year she voiced support for the Jogbahn Clan's struggle against EPO - as reported by The Ecologist. But her promises have come to nothing.

Voices of dissent stifled - but not yet silenced

The prevailing narrative of Liberia for so long was that of a country ravaged by a long and bloody conflict. The current narrative is one of 'Liberia Rising' - a country that has dusted off the ashes of the war and plans to be a middle income country by 2030 through a development path focused on Foreign Direct Investment.

Within this narrative the voices of communities affected by palm oil have been silenced.

But even if the Liberian government refuses to acknowledge agricultural concessions as a fraught national issue it is being viewed as such internationally.

The Roundtable on Sustainable Palm Oil, the industry body for the palm oil sector, undertook a mission visit to Liberia. This was the first of its kind to address the high volume of complaints lodged by communities in Liberia against Golden Veroleum Liberia and Equatorial Palm Oil.

However the vast number of complaints lodged to the RSPO by Liberian communities without satisfactory resolution shows the inherent weaknesses of such industry created voluntary mechanisms.

The 'breadbasket' narrative - 'production must increase!'

The voices of affected communities are also absent from the current prevailing 'breadbasket' narrative which argues that feeding the world requires investment in large scale agriculture to make Africa's 'unproductive' land productive.

A widely reported study, 'Food appropriation through large scale land acquisitions', shows how 300-550 million people could be fed if land "marginally utilized because of lack of modern technology" was subjected to high-tech commercial agriculture, compared to the "190-370 million people [that] could be supported by this land without closing of the yield gap."

But it also draws attention to the fact that the increases in food production would not bring benefits to the countries, or communities, whose land was used in this way:

"These numbers raise some concern because the food produced in the acquired land is typically exported to other regions, while the target countries exhibit high levels of malnourishment. Conversely, if used for domestic consumption, the crops harvested in the acquired land could ensure food security to the local populations ...

"These investments in agriculture often occur without the 'informed consent' of current land users, with no consideration of the societal and environmental impacts of the conversion from subsistence farming to large scale commercial agriculture, and without ensuring that the profits are shared with the local communities (ILC International Land Coalition 2011). For these reasons the process is often referred to as 'land grabbing'."

So the study does address the fact that the crops set to be produced on this grabbed land are not to grow food for subsistence and local markets but for cash crops for export - to support the Global North's unsustainable overconsumption of biofuels, animal feed and processed goods, not to feed the hungry and malnourished people of the Global South.

Land as a human right

And its conclusion is astonishingly - indeed disgracefully - weak: "While there are some pros in the increase in agricultural production that could result from large scale investments, some measures should be in place to ensure that the benefits are shared with the local populations."

This is an entirely inadequate reflection of the reality that hunger in the world today is a political and economic artefact - and not the result of a shortage of food production.

Nor does it represent the truth that land is much more than an 'economic factor of production' - but is the root of the culture, livelihood and spirituality of those millions of people worldwide that depend on their land to survive.

Nor does it acknowledge that the right of Indigenous Peoples to remain on their historic land is a fundamental human right, essential to their survival and dignity. This right is strongly maintained in Convention 169 of the International Labour Organization on Indigenous and Tribal Peoples, which states (Article 7):

"The peoples concerned shall have the right to decide their own priorities for the process of development as it affects their lives, beliefs, institutions and spiritual well-being and the lands they occupy or otherwise use, and to exercise control, to the extent possible, over their own economic, social and cultural development. In addition, they shall participate in the formulation, implementation and evaluation of plans and programmes for national and regional development which may affect them directly."

So any land-grab of indigenous territory, such as that of the Jogbahn Clan, is in fact a severe breach of internatinal humanitarian law. How on Earth could this essential fact escape the notice of the distinguished academic authors?

Only small scale, sustainable agriculture can feed the world

The former UN Special Rapporteur to the Right to Food, Olivier De Schutter argued in The Ecologist that shifting to large‐scale, highly mechanized forms of agriculture will not solve hunger but make it worse.

Poverty and hunger will be addressed by ensuring communities have access to land and resources and are supported in small scale agriculture. Smallholder agro-ecological farming and small-scale food production can ensure the sustainable use of resources and sustainable livelihoods. It can also out-perform industrial commodity production.

70% of the world is fed by smallholder farmers like the Jogbahn Clan. The Clan countered the unproductive land argument better than any academic paper could when they presented all the crops they produced on their land to the visiting RSPO delegation. "This is why we will not give up our land", said Chio.

Though the Jogbahn Clan continues to face the threat of the imminent clearing of their land, they will keep resisting.

And given the rousing calls of "Community Action" made by the communities when they came together to form the solidarity network they will not be alone but alongside other communities in Liberia and in solidarity with communities resisting land grabs worldwide.

Jacinta Fay is a community worker and campaigner for the Community Rights and Corporate Governance Programme of the Sustainable Development Institute/Friends of the Earth Liberia which supports communities protect their land and resources and challenges corporate and government actions which threaten community rights. She is also Landgrab Campaigner for Friends of the Earth International which works to challenge landgrabbing, defend community territories and protect land rights. She also campaigns on trade justice, reproductive rights and social justice.

Silas Kpanan'Ayoung Siakor is a campaigner on Community Rights and the founder of the Sustainable Development Institute/Friends of the Earth, Liberia a national civil society organisation promoting the sustainable and just use of Liberia's natural resources. Silas has received the Goldman Environmental Prize in 2006, the Award for Extraordinary Achievement in Environmental and Human Rights Activism from The Alexander Soros Foundation in 2012 and TIME Magazine chose him as one of the 2008 Heroes of the Environment.