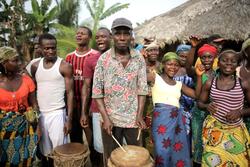 Listen to the interview with Silas Siakor, campaigner at the Sustainable Development Institute

Liberia, a country located in the West coast of Africa has been hit by two civil wars (one in 1989 and the most recent one in 1999). Conflicts have left the country generally weakened particularly in terms of food sovereignty. Far from armed conflicts, Liberians are now facing a land grabbing process that is further threatening their ability to produce their own food. As a response to this advance, a community in Grand Bassa county managed to successfully resist the encroachment of a British palm oil company, ensuring their right to the territory and their way of living.

The company in question is Equatorial Palm Oil (EPO). In January 2008, EPO acquired Liberian Operations Inc (LIBINC) and claimed around 169,000 hectares of land that the government had granted in concession to LIBINC as their own. Approximately 7,000 people of the Jogbahn clan have been living in the lands claimed by EPO for several generations.

None of the communities were consulted or gave their free, prior and informed consent for the concession granted by the government to LIBINC, as established by Liberian laws and Convention 169 of the International Labor Organization (ILO).

This determination, together with the pressure of national and international organizations, made Liberian President Ellen Johnson intervene by calling community members to meet with her. After the meeting, Johnson committed to ensure the right of the community to their territory, specifying that EPO could not take their lands.

In an interview with Real World Radio, Silas Siakor, campaigner at the Sustainable Development Institute (SDI-Friends of the earth Liberia), an organization that has provided fundamental support to these communities, considered that one of the key elements in the success of this struggle was unity: “Even though the company made a sustained effort to try to bring in division within the community, they have stood together (…) the community has been extremely united. As a result of that, the resistance has been really difficult to break”, he said.

As a second key element, Silas highlighted the clarity of the community in terms of their demands: they demanded EPO to “stop the land survey in Jogbahn Clan; not clear any more of their customary land; and not expand their oil palm plantation any further onto their customary land”.

Despite the victory achieved by the Jogbahn clan, Silas said that EPO has not acknowledged the Presidential statement and has continued to conduct studies of the Clan´s land in preparation for clearing.