Sexual abuse among claims against HAGL 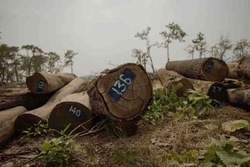 Numbered logs sit inside a rubber concession belonging to a subsidiary company of HAGL in Ratanakkiri province. (Photo: Global Witness)

Sexual abuse among claims against HAGL

Sexual assault and the annihilation of sacred graveyards are among the many claims levelled at Vietnamese Rubber giant Hoang Anh Gia Lai (HAGL) by villagers in Ratanakkiri province, a report by the World Bank’s investment arm reveals.

In February, 17 indigenous communities that accused HAGL of land grabbing filed a complaint with the World Bank’s International Finance Corporation (IFC) – which invests in the rubber producer via an intermediary fund called Dragon Capital Group. The submission triggered an investigation by the IFC’s internal watchdog, the Compliance Advisor Ombudsman (CAO).

In an initial assessment dated May 12 and published on its website, the CAO documented villager claims against HAGL of depleted fish levels in waterways, encroachment and destruction of sacred land, deaths of hundreds of livestock, and, in one of the more shocking accusations, sexual abuse by company employees.

“The communities also shared with CAO that there were two instances of sexual assault by Company workers, resulting not only in individual duress, but also impacting how women in the village go about their daily activities to avoid potential harm,” the CAO report reads.

HAGL declined to respond yesterday, but from the company’s perspective laid out in the May 12 CAO assessment, the agriculture giant maintains it has abided by Cambodia’s laws, though conceded it could have initially done more for villagers evicted to make way for the development.

“The Company recognizes that it had not put greater focus on developmental opportunities for local communities earlier in the development of their operations,” the statement reads.

Affected villages contacted yesterday were not privy to the cases of assault but claimed continued mistreatment at the hands of HAGL workers, including the theft of farming equipment.

“We think that they did this because they did not want us to do any farming on the land that they cleared,” Romam Tham, a farmer from Kak village, said yesterday.

The Post reported last week that HAGL had suspended work on three of its projects in Ratanakkiri from May 1 to November 30. An April 28 company memo instructing the suspension did not detail the reasons for halting work, but noted the response followed a meeting with the IFC’s ombudsman on April 2.

The Washington-based CAO reiterated its message via email that its report states both villagers and HAGL have agreed to a dispute resolution process that the IFC’s ombudsman will facilitate.

HAGL has constantly been at the centre of controversy over its agricultural investments in Cambodia. Last year, UK-based NGO Global Witness published a report accusing the company of illegally logging outside concession areas and of being in possession of at least 47,000 hectares of economic land concessions – almost five times the legal limit.

Eang Vuthy, executive director of NGO Equitable Cambodia, which is working with affected families, said yesterday that having an open dialogue was an important step, but that there was still work to be done in achieving an appropriate resolution.

“It is important to give it a try for all parties to meet and talk,” he said. “If we can’t address the problem we will consider [the] next stage.”

ADDITIONAL REPORTING BY MAY KUNMAKARA