Monrovia -The long fight between the people of Joghban and other surrounding clans and the Equatorial Palm Oil Company seems to be over as President Ellen Johnson Sirleaf on Wednesday made a remarkable decision which left the elders and people smiling and dancing.

The President during a meeting held behind closed doors Wednesday, March 5, 2014 at her foreign ministry office told the villagers that they can rest assure that there would be no further expansion by EPO on the land according to the residents of the town who had traveled all the way from Grand Bassa County to Monrovia.

“She did well for our land business. When we spoke to her that we don’t want for the EPO to extend it, she agrees to it and said ok,” said Joseph C. Johnson, Paramount Chief of Joghban town one of the areas affected by the EPO concession.

Expressing his happiness over the decision by the President to halt all further expansion by the EPO, he said the President told them that it was up to them to decide whether the company should expand or not adding that this decision was a total emancipation for them.

“I happy because I have independence for my clan Jorblah Clan, because for long we have fought the battle for our land business; I tell President Ellen Johnson Sirleaf thank you plenty,” said Chief Johnson.

Johnson said the towns maintain their stance that they want no further expansion of the palm oil company and that they are happy that the government has come to understand that the locals have a right to demand that they are left alone to use their ancestral lands as they see fit.

“The place we told them to stop that’s the place they should stop,” he said. “Palmbay must not extend any further. Let them be in the same place that they are. Us and they will sit down for our land that they have already occupied and talk.” 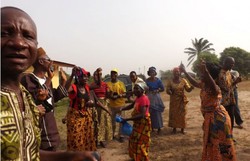 People from Joghban, Liberia celebrate the decision of the President of Liberia to support their efforts to stop the UK company, Equatorial Palm Oil from expanding on their lands. (Photo: FrontPageAfrica)


“We don’t want no more problem in the district; we and the animal and thing in the same bush; we eat, we drink our water,” said Chief Johnson. “Mama Ellen we tell you thank you plenty; we will go and rejoice; we and the company will sit down and talk now because the land is for us now; the happiness we carry to our place that’s a small thing? I think the people finish hearing it back home.”

The Sustainable Development Institute (SDI)a local forest rights NGO that has been in the vanguard advocating for the people of the affected areas has welcomed the President’s commitment to protecting Joghban clan’s land for what it calls further encroachment by the British palm oil company EPO.

“The Sustainable Development Institute (SDI) congratulates the President on her bold step in recognising and respecting communities’ customary ownership of their land and their rights to say yes or no to palm oil plantation on their land,” stated the company in a release issued Thursday evening.

Continued SDI: “This is a victory for Joghban clan who have secured their rights to their most valuable resource; their land which they rely on for their livelihoods and their cultural heritage” said Silas Kpanan’Ayoung Siakor, SDI’s Lead Campaigner, “This is also a victory for community rights in Liberia with communities’ voices being heard and respected. Hopefully, this marks the beginning of a progressive practice. The government’s willingness to listen to these community concerns and taking steps to ensure that those concerns are addressed is laudable.”

The government’s commitment to the people of Jogban clan in the Wednesday meeting to supporting communities in protecting their land from further expansion of the company, many inhabitants of the area are now confident that they can now be free to engage in whatever activity as a people.

“Our President told us that indeed the land is ours and we must be consulted before anything is done on it,” said a jubilant Deyeati Carter, speaking through an interpreter in her local Bassa dialect.

“We were being ill treated, we were beaten, we were taken to prison for this same land and so for the mother of this country to come in and say ‘look I will make sure that the company stops where it is, until we can go into a dialogue where you can agree or disagree,’it is a joyous news for me.”

It seems the outcome of the meeting has already begun to resound around the EPO concession area already, FrontPageAfrica’s Grand Bassa County reporter who went to see the company’s management to get their reaction to the news said that the Senior Assistant Plantation Manager, David Woah told journalists that he was disappointed over the decision and blamed SDI and other pressure groups for inciting the people against the company.

He said the locals have been organized by even lawmakers to resist the survey, even though he did not name them. Founded in 2005, Equatorial Palm Oil PLC (EPO) a crude palm oil company is publicly listed on the Alternatives Investment Market (AIM) of the London Stock Exchange in the United Kingdom.

The company claims it holds a land bank of 169,000 hectares in Liberia. On December 21, 2007, the Republic of Liberia and LIBINC Oil Palm, Inc entered into a Concession Agreement. The EPO Concession Area is situated within New Cess, Grand Bassa County and the area covered by the agreement is 34,500 acres.

The company claimed to have planted a total of 13,837 acres (5,600 hectares) of the 34,500 acres (13,961 hectares) it acquired under the concession agreement with the Republic of Liberia in 2007 and towards the end of 2012 and continued into 2013, when EPO began clearing new areas to expand its plantation, affected communities came together to demand that the company stop the expansion.

The company and locals were embroiled in a bitter confrontation that led to protests and arrests when EPO forcibly conducted a land survey without the consent of the affected communities. But when communities attempted to halt the survey a paramilitary unit of the Liberia National Police, the Police Support Unit (PSU) was deployed into the area.

On September 18, 2013 SDI supported citizens of 11 villages within the Jogbahn Clan to file a complaint to the Roundtable on Sustainable Palm Oil (RSPO) regarding the EPO’s planned expansion. The complainants asked that the EPO should: (a) stop the land survey in Jogbahn Clan; (b) not clear anymore of their customary land; and (c) should not expand their oil palm plantation any further into their customary land.

After months of negotiations and advocacy by community members, SDI, and international partners, the President extended an invitation to Jogbhan Clan representatives to meet with her in Monrovia which led to the outcome that has made the people smile once more.