The anatomy of a Mozambique land deal 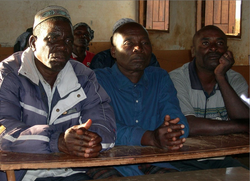 Local leaders at a recent meeting in Bandeze, Mozambique discuss the impact of a plantation project in the area (Photo: Anna Wallenlind Nuvunga/IRIN)

NIASSA - A multi-million dollar “ethical” plantation development in northwestern Mozambique - the initiative of a clutch of Scandinavian faith-based organizations - has faced alleged acts of sabotage by the very people it was designed to assist, illustrating the divisions between foreign benefactors and local communities.

The company Chikweti Forest conceded in a recent environmental impact assessment that the land dispute was rooted in the initial, failed, consultation process, which did not involve either an entire community or neglected to consult others that were to be affected.

Local authorities, NGOs and Chikweti Forests are now engaged in a conflict resolution process with those affected by the project.

Chikweti Forests is owned by the Global Solidarity Forest Fund (GSFF), a Swedish-based investment fund founded in 2006 by Sweden’s Diocese of Västerås, the Opplysningsvesenets fond (OVF, a national Norwegian church endowment) and the Norwegian Lutheran Church, with the goal of community development and poverty alleviation. The GSFF has several investors, the largest being the Dutch public-sector pension fund Stichting Pensioenfonds ABP.

The fund aims to create a 100,000-hectare pine and eucalyptus plantation in the Lichinga Plateau, near Lake Malawi, which is seen as a large-scale, sustainable investment in the country’s largest and least populated province. The initiative intends to provide a return for investors while also improving community livelihoods.

About 15,000 hectares of the plantation have so far been planted.

But about a year after Chikweti’s launch, reports of arson and uprooted saplings began to emerge. Chikweti estimates that between 2007 and 2012, the company lost US$1 million to fires - 60 percent of these fires are thought to have been criminal and the remainder accidental. The highest number of fires to date occurred in 2012.

According to Mozambique’s land tenure system, all land is owned by the state, although local communities have customary rights to it if they can prove usage for the past 10 years.

The FIAN report, citing research by the World Bank and the US-based think tank the Oakland Institute, said between 2004 and 2009, Mozambique transferred 2.7 million hectares of land to investors. Foreign investors were granted one million hectares of these transfers, “73 per cent of which are for the forestry sector, and 13 per cent for agrofuels and sugar.”

The report noted that, in the absence of a public land registry, “most contracts between investors and government are kept secret”.

The origins of the Chikweti land dispute can be traced to numerous causes, from locals’ high expectations for development projects and employment opportunities to local leaders agreeing to the concessions without understanding how large an area 1,000-2,000 hectares was or that it would take decades before the land would be again available for communities to cultivate.

According to community members, the plantation took land that had been left fallow or that was being saved for the next generation.

Chikweti’s negotiations with the top traditional leaders also made lower leadership members feel they had been overlooked in the consultation process, several local leaders complained to IRIN.

Cucena Namalha, from the local NGO Estamos, which is assisting in the conflict resolution, told IRIN, “When we first came to the communities here, there were many complaints, for example about bridges and schools that Chikweti had promised to build. We ask the communities, ‘Have you signed any papers? Is it written anywhere what they have promised?’ The answer is no. The only thing we can do is make sure that the same thing doesn’t happen again.”

Efforts are now underway to conduct delimitations to help determine land access. This is usually the responsibility of the local authority’s land surveyors, but because of limited capacity, NGOs are assisting in the process.

At a recent meeting hosted by Estamos in Bandeze, one of the affected communities, an NGO representative explained the goal: “We are here to protect you and your children from future investors that want to use your land. If your land is formally delimited, it will be easier for you to defend yourself and to decide what parts could be used for investments and what part you need to keep.”

However, such guarantees from Estamos were met with scepticism. Local leader Victorino Rajabo said at the gathering, “You must understand, they [the community] are afraid. When Chikweti came, we lost a lot of land. Now they don’t know how to react. They don’t know what to hold on to.”

Chikweti has provided employment opportunities to locals, but this, too, has proved problematic. Employment levels at the plantation have fluctuated from a high of 6,000 people to the current 1,300 permanent jobs plus 800 seasonal workers.

Chikweti’s CEO, Chris Bekker, said when he assumed his post in 2011 that the company was performing poorly because only about 24 percent of employees routinely arrived on the job. He attributed this to many people never having experiencing the responsibilities of formal work.

Meanwhile, many who had not benefited from employment opportunities were angry. “Only the ones who are employed by Chikweti really gained something, but they are eating at other peoples’ expense,” Rajabo told IRIN.

Bekker attributed the land dispute to a variety of issues, including poor communications and high expectation about role the company would play developing local communities. He has spent his first two years on the job slowing the company’s expansion plans while working to engage with the locals.

The company has employed trained conflict resolution experts from Lichinga to provide regular dialogue with affected communities in their mother tongues. It has also established community a fund; the first of the fund’s disbursements were used to build basic mosques, maternity facilities, health posts, schools and bridges.

The community outreach projects have had a calming effect. In the village of Ussumane, tensions appeared to have dissipated.

As part of the fund’s terms, the community receives $5 for each hectare that is not burned or vandalized.

“The fires are not always started by people in the communities where we work; it can be done by neighbouring communities in order to harm people they are upset with or because of jealousy,” Bekker said.

The company has adopted a rotation system for the seasonal employees, with the objective of distributing income among different community members, with one team working one week and another working the following week. More permanent jobs are envisaged once the company begins its expansion plans.

Since 2011, the local government has not accepted any new applications for using communal land for plantations, and it will not do so until existing conflicts are resolved.

“We are more careful now, especially concerning the forestry industry,” Silva Joao, director of geography and state land delimitations at the agricultural department in Lichinga, told IRIN. “We will use the best methods we can find to secure a massive participation. We don’t want any more reports about land conflicts because of poorly done consultation processes,” he said.