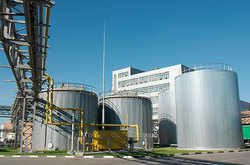 EBRD funds are being used to increase the ttal land bank held by UkrFarm to 300,000 ha, (Photo: EBRD)

The FINANCIAL -- The EBRD is stepping up its support for Ukrainian farmers and its drive to help Ukraine consolidate its position as one of the world’s leading agricultural commodity producer and exporters, with an increase in a financing facility to provide working capital to the agricultural sector.

This new transaction raises to US$40 million an initial US$20 million facility agreed in 2010 and is part of the Bank’s campaign to help bring down the cost of food by boosting agricultural output and restoring production on unused land in the region.

The Bank is providing the facility to UkrFarm Funding Limited, which will on-lend loan proceeds to over 70 agricultural companies located across the northern Ukraine . UkrFarm is fully owned by the Ukrainian Agrarian Investments (UAI) - a registered holding in which Renaissance Group is a majority shareholder.

The investment is expected to improve the efficiency and yields of land that is already being used and to  bring into production additional 50,000 hectares of land, thus increasing UkrFarm’s total bank of arable land to 300,000 by the end of 2013.

Alexander Kostenko, CEO of UAI, said: “EBRD’s support over the last 12 months has been an important factor in taking UAI to the next development stage. We are proud that the EBRD will continue to support UAI in its growth over the next agricultural cycle. With the increase of the financing facility we will be able to continue to enhance our land bank utilisation significantly. In addition, from a broader perspective the funds represent an important support for Ukrainian farmers, who will benefit from increased investment into the sector.”

Gilles Mettetal, EBRD Director for Agribusiness, said: “The Bank is once again demonstrating its commitment to the sustainable development of local agriculture. This project supports modern primary agriculture in Ukraine – a key sector for the national economy”.

In the agribusiness sector alone, the EBRD has directly committed more than €6 billion in over 400 projects across central and eastern Europe and the Commonwealth of Independent States since 1991.

The European Bank for Reconstruction and Development is the largest financial investor in Ukraine . As of 30 June 2011, the Bank had committed over €6.5 billion ($9.3 billion) through 276 projects.