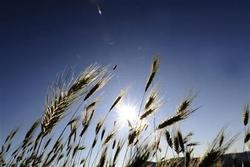 "The last thing they want to do is to be on the other side of a trade to a starving person in Africa," says a source in the fund management industry (Photo: Reuters/Ognen Teofilovski)

(Reuters) - Some pension funds are beginning to question their investments in commodities after accusations that massive flows into the sector have distorted markets, fuelled food inflation and hurt poor nations.

The role of hot money in commodities has unnerved some investors following high profile campaigns by pressure groups and French President Nicolas Sarkozy linking surging grain and fuel prices to a rise in poverty in developing countries.

"The last thing they want to do is to be on the other side of a trade to a starving person in Africa," said a source in the fund management industry in London who has noted an increase in concern about the issue but declined to be named.

France is due to press for tough new regulations on commodity speculation at the first ever summit of agriculture ministers of the G20 group of top economies this week.

Many fund managers have stuck to the view that a near 40 percent rise in global food prices over the past 12 months as measured by the UN Food and Agriculture Organisation is being driven by short supplies and burgeoning demand, not speculation.

But worries are increasing that billions of dollars of fresh investment from pension and hedge funds may be exaggerating swings in prices and creating excessive volatility.

One fund concerned about a possible link between commodity investment and spiralling food prices is Dutch pension fund PME, which manages over 20 billion euros (17.8 billion pounds) for workers from the metal engineering sector.

"PME is thinking very seriously about the effects of its commodity investments and has to weigh different interests," a PME spokeswoman said.

"Naturally, it looks very closely at the social effects of its investments, such as the possible contribution to increased poverty. So far this effect has not been proven in our view."

According to Barclays Capital, which has been at the forefront of selling investments linked to commodities, such as index swaps and exchange traded products, total money in those type of products have ballooned to over $400 billion (248 billion pounds).

The 27 billion pound Royal Mail Pension Plan has previously considered investing in commodities, but decided to avoid the asset class for strategic reasons.

"With all the media coverage now, relating to 'cornering the market', if we had invested I am sure we would have had to consider our position," said Gerry Degaute, chief executive to the board of trustees overseeing the scheme.

Another sign of the growing interest was a meeting of pension funds in Geneva last week to look at ethical issues regarding investments in food and commodities, said Karina Litvack, the head of sustainable investment at fund manager Foreign & Colonial.

While she does not blame speculation for high prices, Litvack said in a recent interview that there are legitimate concerns about volatility.

Fund managers that specialise in sustainable investments are probing whether they can exercise enough influence when investing in financial instruments linked to commodity funds, said Penny Shepherd, chief executive of UK Sustainable Investment and Finance.

"That's one of the dilemmas around investing in something like a commodity index compared with let's say investing in an investment opportunity like a sustainable forestry fund or a responsibly managed agriculture fund," she told Reuters.

Sharp swings in volatility that may be caused by an excess of speculative money is also an issue for long-term investors such as pension funds and ethical funds, Shepherd added.

Some pension funds flatly reject arguments that their commodity investments may be harmful.

Dutch asset manager APG, which manages the assets of the world's third-largest state pension fund ABP and other funds, said its food and energy investments did not have an upward price effect because its allocation has been stable for many years at around 4 percent of total investments.

"Institutional investors often have a cushioning effect on prices, both upwards and downwards. If prices rise too strongly they are often the parties who sell on a net basis to make sure their allocation to commodities won't be too large," an APG spokesman said.

The largest U.S. pension fund, Calpers, has about $2.8 billion invested in commodities and said it may boost active investments in the sector.

Finland's Keva, which manages local government pensions, said it was not worried about its commodity investments of about 220 million euros, or about 0.8 percent of total capital, because it did not regard index investments as speculation.

The UK's Universities Superannuation Scheme, with about 32 billion pounds of assets, agreed investment may push up futures prices in the short term, but argued this may be beneficial.

"This could allow producers to hedge future output at higher prices, encouraging more investment and more output, and may encourage more storage, helping to keep prices down and to dampen the effects of negative supply shocks such as drought," said Roger Gray, chief investment officer.

(Additional reporting by Cecilia Valente in London, Terhi Kinnunen in Helsinki and Gilbert Kreiger in Amsterdam)