Rising world food prices may soon hit Africa hard, but could be a future boon 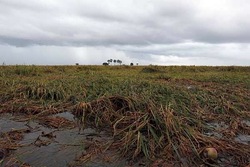 Damaged rice is seen in a paddy field destroyed by flood- waters near a village in Manmunai West in Batticaloa district, about 199 miles east of Colombo, Sri Lanka, on Jan. 26. The floods inundated rice paddies, and according to the UN Food and Agriculture Organization, at least 15.5 percent of the main annual rice harvest could be lost. (Photo: Andrew Caballero-Reynolds/Reuters)

Johannesburg, South Africa
Global food prices reached a historic high last month, a fact that may cause even the most comfortable of Americans to cinch in their belts and cut back on spending.

"Global food prices are rising to dangerous levels and threaten tens of millions of poor people around the world," World Bank Group President Robert Zoellick said Tuesday as he announced the bank's findings that about 44 million people in developing countries have been pushed into poverty since last June because of rising food prices.

Here in Africa, where many people spend as much as 60 to 80 percent of their income on food, higher food prices don’t mean cutting costs. They mean spending the same amount for less food. In a word: hunger. But that's the short term.

In the longer term, a sustained global trend of rising food prices – caused in part by growing demand from China and in part by crop failures in Russia, Pakistan, Australia, and Sri Lanka – may have generated more investment in the poor but agriculturally rich nations of Africa, spurring on better food production and better food security for both Africa and the West.

“Over the long term, it’s going to be a period of high prices,” says Yvonne Mhango, an economist for the Renaissance Capital economic forecasting firm in Johannesburg, South Africa. “With the growth of the middle class in China, and growing consumption, that trend is going to encourage investment in food production, especially in Africa, which is more sparsely populated and with access to water sources.”

In theory, more investment in African agriculture is a good thing, because it creates jobs and increases the amount of food available in the global market, thereby lowering prices. But there are good land deals that ensure a portion of the food grown in a country remains in that country, and there are bad deals that don’t, says Ms. Mhango.

“Whether or not [new agribusiness investment] benefits Africa depends on leadership and the deals that are struck between countries and the investors,” says Mhango.

For the short term, however, higher food prices are likely to mean suffering for the world’s poor.

According to the United Nation’s Food and Agriculture Organization (FAO), food prices in December reached their highest level, topping even the 30-year highs of 2008. The FAO’s Food Price Index showed increases in all areas, including food grains, although the greatest increases were in sugars, oils, and fats. The benchmark price of US wheat rose 50 percent compared with the same time last year, while the price for corn (a common food staple in Africa) was 45 percent higher than last year.

Given how little margin many rural and urban poor African citizens have for survival, rising food prices can often have political ramifications, a fact that the former president of Madagascar, Marc Ravalomanana learned in March 2009. Mr. Ravalomanana was overthrown in a bloodless coup d’etat, after an agricultural land deal with Korean conglomerate Daewoo came to light. The deal would have given Daewoo a 99 year lease on nearly 50 percent of Madagascar’s arable lands, with all of the produce being exported to South Korea.

Rising food prices may have also exacerbated the political tensions in the North African countries of Tunisia and Egypt, where citizen revolts ultimately toppled their long-ruling authoritarian governments.

The problem of high food prices is worse, of course, in those areas where the transportation of food is restricted by conflict. In the East African nation of Somalia, maize prices were 79 percent higher than last year and sorghum prices were 81 percent higher, a staggering fact when one considers that Somalia is flooded with foreign-donated food aid, and that more than half of the Somali population relies almost entirely on (free) food donations.

Urban poor to be hit hardest

“Those who are hit the hardest are going to be the urban poor,” says Mhango. “The rural people will be able to eat whatever excess they have produced, and they'll manage to scrape by. But ... in the slums ... where you can’t grow food because of the intense congestion, people are likely to have a much harder time.”

“That is going to be increasingly difficult in an election year like this one,” she adds, referring to the fact that some 30 African countries are scheduled to hold elections over the next 12 months. “Higher food prices can become a political issue.”