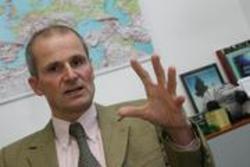 By Boris Groendahl and Zoe Schneeweiss

Ukraine was the world’s biggest shipper of barley in the year to September and also produces wheat and corn. Governments in North Africa and the Middle East are seeking food supplies as protests spread to Tunisia, Egypt, Algeria and Yemen. World food costs rose to a record last month on higher dairy, sugar and grain prices, the United Nations said yesterday.

“Countries like China and Libya are interested in buying large agribusinesses to secure their supplies,” Wolfgang Putschek, co-head of Raiffeisen, said two days ago in an interview in Vienna. “Several” acquisitions are pending, he said, declining to elaborate.

Siberian Agrarian Holding Co., a Russian grain and bread producer, is in talks on the possible sale of a 49 percent stake, its Chairman Pavel Skurikhin said in a Feb. 3 interview in Moscow.

Putschek, 46, who leads Raiffeisen together with Martin Schwedler, 42, said the typical agribusiness acquisition in Ukraine is worth about 50 million euros to 200 million euros ($68 million to $273 million). “These investors are less concerned about margins and profitability,” he said. “They want to secure access to the produce.”

Raiffeisen is part of a banking group that dates back to 19th century farmers’ credit cooperatives in Germany and Austria and opened its first bank in the former Communist part of Europe in 1987. Raiffeisen Bank International owns Ukraine lender VAT Raiffeisen Bank Aval.

“The political price for that is an authoritarian tendency that shows very strongly,” he said. “However for business and investors, the disadvantages of this authoritarianism aren’t as decisive as the certainty they gain thanks to the stability.”