Taiwan Rural Front (TRF) holds an international press conference today, requesting the authority to stop land grabbing in Taiwan. It also announces its “return” to the Ketagalan Boulevard on July 16th, with farmers whose farmlands are under the threat of unjust expropriation. International figures and groups focusing on farmers’ rights and condition, including Dr. Vandana Shiva, recipient of Right Livelihood Award and founder of Navdanya Foundation, members of Landless Farmers' Movement (Movimento dos Trabalhadores Rurais sem Terra, MST) from Brazil, Focus on the Global South, and GRAIN, the NGO focusing on cross-border land-grabbing issues, all share their support to TRF’s action onsite or via video conference call.

The Taiwan society was astonished to see a horrible story unfolding at Dapu (大埔), a rural community of Miaoli County (苗栗縣) in early June last year. The local government abused its power of land expropriation. Forty-three families were expelled from their homes and farmlands in a dawn raid. Rice in paddy fields nearly ready for harvest was totally destroyed by bulldozers and even the topsoil was dug up and discarded to prevent any re-cultivation of the land. A second terrible case occurred at Siangsihliao (相思寮) in Changhua County (彰化縣) where twenty-one elderly farmers and their families were forced to leave their homes and farmlands because the government planned to construct an industrial park on their land. The above are only two cases that received a measure of media attention. With the assistance of the Taiwan Rural Front (TRF), hundreds of farmers from all of these areas as well as several thousand sympathetic citizens staged a sit-in and sleep-in for ‘land justice’ on July 17 and 18, 2010 in front of the Presidential Office in Taipei. They protested against the expropriation of their farmland, their very means of livelihood, without due process or consent. They asked the government to cease such land expropriation until the relevant law is appropriately rectified.

As the culmination of many previous protest actions, the sit-in/sleep-in caught the attention of the media and hence of the government. Premier Wu Den-yih (吳敦義) finally promised last July to make special arrangements for the two best-known cases (Dapu and Siangsihliao), including allowing farmers to keep their houses on the site while the government indentified other plots of land to compensate for the farmland seized by the government. With fading media attention, however, the promise has turned into foot-dragging. The expropriation orders have yet to be revoked, which means that the evictions can still proceed. In the past year, Taiwan has seen little change in land-grabbing policies and schemes, and a TRF-sponsored draft revision of the Land Expropriation Act did not even get past the Procedure Committee of the national legislature. The farmers and the TRF have thus decided to return to the Ketagalan Boulevard in front of Presidential Office on July 16 and 17 this year. At the same time, TRF and the joint international activist groups have decided to make the statement of three major points:

1. Land expropriation is a very serious state measure because of its grave moral, political, and material consequences involved. In Taiwan, however, land expropriation has long been almost habitually abused. Underutilized science and industrial parks can be seen practically everywhere in Taiwan, yet land expropriation schemes continue to multiply. This is a tremendous irony for Taiwan, a country that claims to be a constitutional democracy that guarantees citizens the right to private property.

2. The initiation of land expropriation must be predicated on the public interest, and the fulfillment of the public interest requires the most stringent administrative procedures and full participation of local residents to reach the widest possible consensus. Current legislation gives local residents and landowners no effective right to oppose expropriation at all. Despite legal requirements for public hearings, price negotiation between the government and landowners as well as reviews by “planning committees,” these safeguards have remained paper ones. The Land Expropriation Act is in dire need of a complete overhaul and recasting.

3. The expropriation of family farms is shortsighted and suicidal in more senses than one. Taiwan has an appallingly low food self-sufficiency rate (30%), far lower than China (95%), Germany (99%), France (122%), the U.S. (128%), and even Japan (40%). Yet the government is blissfully unprepared for the global food crisis that has worried the world since 2008. Along with many related problems such as global warming and climate change, land grabbing and unjust expropriation has profound implications for Taiwan’s present and future, including food security and stability. 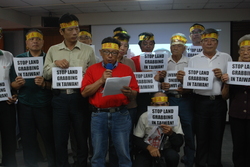 In short, TRF calls on the authority to revise the unthinking presumption “we can always buy and import” without considering its consequences. The self-conflicting policies that uproot rice farmers in Taiwan while at the same time considering leasing land in Africa or Central America to produce rice 'offshore' for Taiwan's food security was also criticized by GRAIN. The press conference participants share their thoughts on the condition in Taiwan as well as the comradeship on resisting unjust governmental and corporate land grabbing actions. They call on the Taiwan government to stop land grabbing immediately.