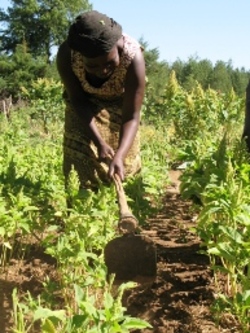 Africa is known for its natural beauty and roaming troves of animals. Unfortunately, it is perhaps more easily recognized for its negative aspects that include persistent ethnic conflicts, which are primarily a result of a late colonization process that drew artificial boundaries, divvying up the land according to the whim of European 'explorers.'

While this is abhorrent in itself, the status and authority of government remains a pertinent issue. This is most easily seen in Rwanda and Zimbabwe. The former has been torn apart because of ethnic cleansing efforts and an overly zealous army. The latter has been run by Robert Mugabe for the past 20 years, while he has essentially reigned as a dictator, oppressing his own people to permit his own opulent lifestyle.

Yet, these issues have risen to the forefront of global awareness as HIV/AIDS becomes more prevalent in the region and as Feed the Children continues to bombard televisions with starving children and their hapless parents. While this measure of poverty seems striking, it is in fact a reality for a large portion of the continental population. But as the UN, the Red Cross and the Red Crescent continue their efforts in the region, other organizations have begun to exert their influence. The newest financial trend is agribusiness, focusing specifically on underdeveloped areas within African states. One of the most prominent is Dominion Farms, an Oklahoma-based company run by Calvin Burgess. According to Business Weekly, Dominion leases 17,000 acres near a village in Kenya. Burgess claims that the area was formerly incapable of supporting crops, but villagers disagree.

In Kenya, farming for profit is a foreign concept. This is not to say that the introduction of this capitalistic endeavor would be harmful, it is simply not a native practice. These villages practice subsistence farming, which means they provide only for themselves and what they believe will be needed during a year. Burgess, after establishing contacts through a missionary group in his church, claimed to be moved by the sight of 'two members of the ... tribe, dressed in suits,' pleading for help. He believed that his agricultural efforts would provide jobs to tribe members and would also compensate those who had to be relocated. After signing a 25-year lease from Kenya's Lands Ministry in Nairobi, Burgess made auxiliary payments to various groups to ensure that the plan could continue unhindered.

Unfortunately, the people of the Luo tribe and members of other tribes in similar situations are unhappy. They feel they have been slighted in what appears to be an orchestrated business deal rather than an attempt to assist foreign people in need. Villagers claim that their crops have been flooded because of misrouted irrigation flows, and those who are hired to work on the farm receive marginal positions for menial pay. This trend is not only present in Kenya, but extends to other African states as well. Both the Sudan and Ethiopia have leased out large amounts of land to foreign investors.

The issue with this is not so much an ethical dilemma, as hearsay and bearing false witness can result in presumptions about the operations of these companies. But the main issue is that these governments are claiming rightful usage of land, even if individuals currently occupy them. By acquiring these private assets in the name of 'capital development,' a terrible precedent is being set in which Africans are considered unable to sustain themselves. Foreign assistance is certainly appreciated, but when it becomes so overwhelming that the natural citizens cannot even participate, its purpose is obscured. Investment, especially in agriculture, is a great way to begin to strengthen development in African states. However, it should be done in a methodical and inclusive way so that African farmers are both educated about new technologies and how to sustain their own crops. Additionally, they should be provided with the increase in income that accompanies capitalistic ventures. To exclude them from this process is to take advantage of the natural resources and empower the governments to continue to act autonomously and without the consideration of their citizens. Not only is this irresponsible, but it represents these agribusiness corporations, not as the munificent providers that they claim to be, but as neo-colonial powers, exercising their monetary influence in a negative way. Surely this is not the type of perception that Americans want for their international endeavors.