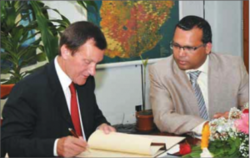 Mauritius' Minister of Foreign Affairs says his government has secured a large area of land in Mozambique to produce rice for his country. Speaking at a "brainstorming session" on August 13, Arvin Boolell says his Ministry "used all its diplomatic weight to acquire prime land" for rice production covering 20,000 ha. Most of the land is in the district of Marracuene in the southern province of Maputo where conflicts over land are already intense.

The land acquisition in Mozambique is part of a joint venture "mega project" that Mauritius launched around a year ago, after being approached by the Singaporean company Vitagrain. Vitagrain is controlled by the private equity firm Intrasia Captial, founded by Australian financier Graeme Robertson, who is a major player in the mining, real estate and energy sectors of the Indian Ocean region. Robertson is one of a growing number of investors who, since the outbreak of last year's food crisis, are looking at agriculture as a strategic investment play. The company intends to develop specialty varieties of hybrid rice that it can sell on the global market.

Mauritius is to serve as the company's base of operations for hybrid rice seed development and production. The Government of Mauritius has given the company a long-term lease on 500 ha of land from a former state sugarcane plantation and they have established a joint R&D programme on hybrid rice involving the country's main agricultural research institutions. Reports on the deal have also mentioned plans to enact plant breeders' rights legislation.

While there has been some talk of eventually producing rice for food in Mauritius, the focus is much more on setting up the financial base and doing the seed production on the island and securing land in other countries for rice production. The actual plan of the mega project, which can be gleaned from the various statements and comments made by representatives of the government, appears like this:

Satish Faugoo, the Minister of Agro Industry, says that they intend to produce 150,000 tonnes of rice per year through the project, and, since signing the deal with Vitagrain, Mauritius has sent diplomatic missions to several countries to try and secure lands. It reached a memorandum of understanding (MOU) with Madagascar to facilitate trade of agricultural products and the two countries were at advanced negotiations on a deal to enable Mauritian investors to invest in food production before the Malagasy government was overthrown in March 2009. Mozambique is the first country where they have secured access to land.

Out of the 20,000 ha that Mauritius says it has acquired in Mozambique, 10,000 ha are to be used by Vitagrain. The Mauritian government will hold the lease to these lands and will sub-lease them to Vitagrain. Boolell says Vitagrain has already submitted the project proposal for this $43.5m Mozambican rice venture. A scientific tour is planned for the end of September 2009, when, in collaboration with the Mozambican Ministry of Agriculture, Vitagrain will start testing its hybrid rice varieties on the land.

Boolell maintains that this is just the start of its venture into food production in Mozambique. Mauritius is working on another 10,000 ha deal with Ning Group of Swaziland and Boolell says, "the doors are equally open to new projects on other land to be made available."

Part of a trend

With the ink not yet dry on the deal with Mauritius, another group of investors announced the launch of a similar 20,000 ha rice project in Mozambique. The Libya Africa Investment Portfolio (LAP), a sovereign wealth fund of the Libyan government, and the Mozambican company Ubuntu SA say they have secured land for rice production in Bela Vista, capital of Mozambique’s southernmost district of Matutuine. They claim they are set to begin production on an initial 9,000 hectares, which will gradually increase to cover the full 20,000 ha.

This is the LAP's third large-scale rice project in Africa. It has a 15,000 ha rice project in Liberia and, through its local subsidiary Mailbya, a 100,000 ha project in Mali that will mainly produce rice. Both of these projects will pursue large-scale, mechanised production of hybrid rice. In the promotion of the projects, the emphasis is on production for the domestic markets and the benefits that local people will derive. Yet, the intention is clearly there to produce for export. Moreover, in the case of Mali, the national federation of farmers organisations (CNOP) and the local chapter of Via Campesina have already documented a number of negative impacts on local communities.

Questions are also being raised about China's alleged investments in Mozambican farmland. China has pledged $800 million to "modernise" agriculture in Mozambique and allegations have been made that they are using a $2bn loan for the construction of a dam on the Zambezi River to gain access to "large land leases to establish Chinese-run mega farms." In June 2007, the two countries are alleged to have signed an MOU that would allow 3,000 Chinese farmers to settle in the provinces of Tete and Zambezia. China's also committed to establish an agricultural research and technology transfer centre at Umbeluzi, in Maputo province, which will test and introduce Chinese hybrid rice varieties.

Vietnam, for its part, signed a 3-year contract for the development of rice production, also in Zambezia. The deal involves the establishment of a rice research centre.

Esperança Chamba is the cooperation officer at the National Agriculture Research Institute of Mozambique. Her post was created last year to help the government better assess such agreements. But, in an interview with a reporter from the Institute of International Journalism, she admits that they still do not fully understand the motivation behind the surging foreign interest in investment in the country's agriculture. "We do not really know what exactly is behind these agreements and policies but it is up to the government to monitor these policies and come up with measures that ensure sustainability and local participation and ownership,” she says.

Yet, with its emphasis on hybrid rice seed, which cannot be saved by farmers and which is designed for high-input, mechanised farming, it is hard to see how "local participation and ownership" could be part of the agenda of projects such as that of Vitagrain.

Local groups in Mozambique are surprised by the news of the Vitagrain deal. Diamantino Nhampossa, executive director of the National Small Scale Farmers Union (UNAC), says that a decree was enacted in 2007 to halt the giving away of land in the Province of Maputo where Mauritius says it has acquired the lands. "This decree has not been lifted and we will be surprised if land is made available for foreign investment," says Diamantino.

"Marracuene [the site of the project] also has less land than what is being asked for, so it does not make sense," adds Diamantino. "This is an area that is known for the land conflict between locals and wealthy people from Maputo. Giving away land will add to the conflict."

The pressures on Mozambique are immense. Klaus Deininger of the World Bank says that there have been 13 million hectares worth of  applications for land concessions since the government opened the door to investment in land about a year and a half ago. Deininger says that around 1.3 million of these hectares have already been accorded provisional rights to land, known as Direito de uso e aproveitamento da terra (DUAT). The people of Mozambique have so-far been kept in the dark about this large-scale transfer of their lands. As more details emerge and things start moving on the ground, investors are bound to run up against local communities who do not share their enthusiasm, and who will not give up the lands they need to secure their livelihoods and feed their own people.