The worldwide grab of farmland and water resources 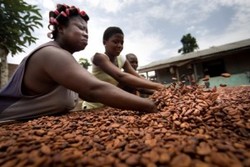 As a result of the current credit crunch and prevailing climate conditions, some business and investment analysts are pointing out how large companies are currently heavily investing in farmland in various areas across the world. The idea is that in the future world, food security will become a major concern. Investing in farmland now could secure food supplies to those nations and corporations that invest in farmlands.

Deuche Bank and Goldman Sachs and investment firm Blackrock have invested heavily in China's livestock and land industries respectively. Rich and powerful individuals such as George Soros and Lord Jacob Rothschild are also getting into the global land buying business. Rothschild invests through a company known as Agfirma Brazil. Other countries where farmland is being sold on a large scale are Cambodia, Indonesia, Pakistan, The Philippines, Southern Russia and Ukraine.

In Africa a new business venture seems to be the acquisition of farmland to be sometimes converted into biofuels plantations. The FAO claims that since 2004, 2.5 million hectares of land has been taken up (what has been termed by some as "land grabs") in Ethiopia, Madagascar, Mozambique, Kenya and Sudan. US company Jarch Capital is doing big business in Sudan, buying up hundreds of thousands of hectares of arable land. Often it is the big bidders with the greatest purchasing and lobbying powers that win these lands. There are indications that one of the reasons why former president of Madagascar (Marc Ravalomanana) was booted out of office is because he signed a massive deal with Korean company Daewoo that would have given away 1.3 million hectares of prime Madagascan arable (farm) lands to the Korean company in order to grow food for Koreans. The local people revolted and Andry Rajoelina took advantage of these (and perhaps other) sentiments and help from the country's military, all of which led to the ousting of Ravalomanana.

A similar grab for water resources began some years back. Major European companies got into the bottled water business. The company Voltic is for instance big in Ghana and in Togo. The parent company owning Voltic is called SABMiller, a brewery company that operates worldwide. Some other analysts have postulated that future wars will not be about oil but will rather be about basic resources such as water and prime farmland. European companies who aware of the potential future scarcity of water have heavily invested in the water business, mostly under the guise of providing bottled water from springs. In future, they will be in a position to control the water resources in the areas where they have large stakes. These companies also sometimes invest in land. I suppose all that is left is for individuals and companies to figure out a way to invest in the air we breathe in order to sell it for profit.

Together with GMO, the land grab wave that is spreading across Africa and other countries in the "developing world" should be brought to the attention of all interested Ghanaians. It is important for Ghanaians to avoid falling for it, if anything should be prudently given up to foreign interests in the form of investments it should be the mineral and petroleum resources, not (or at least certainly before) basic resources like land and water that are essential for life.

Land and water are two essential natural resources whose management should ideally be kept apart from other natural resources such as minerals and petroleum and which should be very prudently invested, if at all. Land and water are essential for two of humankind's basic needs: food and drinking water. Selling off land and water resources to wealthy external/foreign interests may provide some economic respite in the short term but can be disastrous for a country and its people in the long term. Farmlands should be owned by a country and its citizens. Water resources should be protected and not given away to foreigners because in future land and water could be more valuable than gold and oil.
Original source: Ghana News
TWITTER
FACEBOOK
WHATSAPP
PRINT
E-MAIL
TWITTER
FACEBOOK
WHATSAPP
E-MAIL