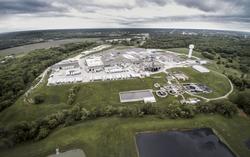 A meat processing plant in Milan, Mo., seen here on Thursday, May 21, 2020, is among the assets held by Smithfield Foods, a subsidiary of Hong Kong-based WH Group. The company owned about 42,000 acres of Missouri farmland as of 2015.
St-Louis Post-Dispatch | 24 January 2023

by Kurt Erickson
JEFFERSON CITY — A push to ban foreign companies from owning farmland in Missouri is facing pushback from major industry groups.
In the first of what could be multiple hearings on legislation to prohibit the further acquisition of acreage by foreign entities, the Missouri Association of Realtors and the Missouri Chamber of Commerce and Industry signaled Tuesday they oppose the Republican-sponsored plans.
“We don’t think it’s the place of government to get involved in private business transactions,” said Sam Licklider, lobbyist for the Missouri Association of Realtors.
At issue are three Senate bills heard in the Agriculture Committee. Each seeks to limit foreign ownership of Missouri agricultural land on the grounds of food security and national security.
Sen. Jason Bean, R-Holcomb, who chairs the panel, said his plan would cut ownership limits from the current 1% to 0.5%.
His plan also would bar ownership by individuals or businesses from certain countries, including China, Russia, North Korea, Iran and Venezuela.
Bean’s plan has support from Secretary of State Jay Ashcroft, a Republican who is expected to run for governor in 2024.
His office would be in charge of tracking foreign ownership, while the Missouri attorney general’s office would enforce the law.
A similar measure sponsored by Sen. Rusty Black, R-Chillicothe, would ban new foreign ownership beginning next year. Sen. Bill Eigel, a Weldon Spring Republican who also is mulling a run for governor, also presented a version of the ban.
“Missouri ought to be owned by Missourians, or at least Americans,” Eigel said.
But, Sen. Tracy McCreery, D-Olivette, said she was concerned about a provision in Eigel’s proposal barring foreign ownership of residential property, particularly for workers at companies like Germany-based Bayer, which is in her district.
The St. Louis-area is the North American headquarters for Bayer’s crop science division.
The renewed push comes after the issue became a flashpoint in Missouri’s recent U.S. Senate election. Democrat Trudy Busch Valentine criticized Republican Eric Schmitt for voting as a state senator in 2013 to allow the sale of Missouri farmland to “communists in China.”
Before a Chinese company acquired Smithfield Foods, Missouri banned all foreign ownership of agricultural land. That rule was changed to allow foreign entities to own up to 1% of the state’s farmland.
Smithfield, now a subsidiary of Hong Kong-based WH Group, owned approximately 42,000 acres of farmland in Missouri as of 2015. Missouri has about 28 million acres of farmland, according to the Missouri Department of Agriculture.
Missouri’s law against foreign agricultural ownership dates to 1978, when increased foreign investment in the U.S. was creating concerns about economic autonomy. The law said no foreign entity could own farmland in Missouri.
Since the law was changed, Smithfield now operates 132 company-owned farms and 109 contract farms along with a pork facility in Milan.
While powerful lobbying groups like the Chamber and the Realtors oppose the measure, the Missouri Farm Bureau supports the concept. Bean said the trio of bills could be merged and forwarded to the full Senate for further debate as early as next week.
Smithfield and other farm-related groups, meanwhile, have been heavy contributors to politicians and political action committees.
In 2022, for example, the PAC for the Missouri Pork Association received $75,000 from Smithfield. In 2020, the MO-PORK PAC netted $76,000 from the company.