"Beware of land grabbing: Central Africans are in danger of becoming foreigners in their own country", say the bishops 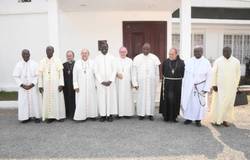 
"Beware of land grabbing: Central Africans are in danger of becoming foreigners in their own country", say the bishops


Bangui (Agenzia Fides) - Shortage of fuel, increase in the prices of basic necessities, insecurity in which vast areas of the country live. These are the main challenges facing the Central African Republic, according to the local bishops in the statement issued at the end of their conference, held from January 10 to 15 at their headquarters in Bangui.
The weak Central African economy also faces another challenge, that of the grabbing of arable land by foreign interests. "The Central African Republic has always been a welcoming and hospitable land", affirm the bishops.
"Against all forms of xenophobia, hospitality and welcoming foreigners are inscribed in the heart of our Christian faith and at the top of our ancestral values. However, now we are witnessing a veritable avalanche of citizens from other countries in the African region and even from other parts of the world to buy land... We have nothing against the injection of foreign capital into the weak Central African economic fabric, on condition that it creates wealth and work for the daughters and sons of this country", say the Bishops, who nevertheless denounce how "large arable plots of several hectares and strategic places of mining and forestry exploitation are being sold".
For this reason, Msgr. Nestor-Désiré Nongo Aziagbia, Bishop of Bossangoa and President of the Episcopal Conference, calls for a revision of the land law, without which, he stresses, "Central Africans run the risk of becoming foreigners in their own country".
These concerns were raised by Bishop Aziagbia himself to President Faustin Archange Touadéra during a meeting between the Head of State and a delegation from the Episcopal Conference, on Saturday, January 14.
The Bishops, when presenting the activities of the Catholic Church in Central Africa, reiterated to the President the apprehensions of the population regarding development, including issues related to roads, education, health and fuel shortages. (L.M.) (Agenzia Fides, 19/1/2023)