Bauchi: Farmers sue govt over allocation of 10,000 hectares of land to Tiamin Rice 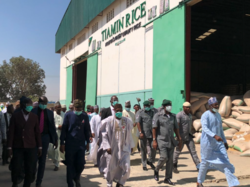 
Bauchi: Farmers sue govt over allocation of 10,000 hectares of land to Tiamin rice

by Paul Orude
A group of farmers and Pastoralists from Zindiwa Community in Udubo District of Gamawa local Government Area of the Bauchi State has sued the state government over allocation of 10,000 hecters of farmland to Tiamin Rice Limited.
The suit number BA/335/22 was filed by Mohammed Bello Yaba, Zindiwa for rice farmers, cooperative society ,against Tiamin rice Limited, Ministry of land and Survey, Attorney General of Bauchi State and the Bauchi State Government.
The group is seeking a declaration that the land of LAN No 39236 Ba/41488 registered on sheet 85SE 20/04/21 ,10,000 hecters of land part of government number three Udubo Grazing Reserve Order 1986 to Tiamin rice being a private company with registration no 1369736 is illegal, null and void.
They argued that allocation of the land to Tiamen by the state government was of no effect having not complied with the due process of the law.
The Plaintiffs are also seeking a declaration that the state government did not validly dereserve government No 3 Udubo grazing land prior to the allocation of the land to the company.and to grant an ordrer of perpetual injuction retraing the defendants, their agents or privies ,assigns ,cohorts or any person acting for them or on their behalf from entering into remaining upon perceling alienating,or tempering how so ever with the plaintiffs land giving to them as permit holders .
In a motion expertee filed by counsel to the plaintiff Barrister Muhammad Alkasim, who maintained that they are the indigenous and natives of Zindiwa whose forefathers owned the vast reserve area which now form part of the grazing reserve.
“In 1986 the then Bauchi State Government promulgated a law which declared their forefathers land as No3 Udubo grazing reserve owners.
“After the promulgation of the law the Plaintiffs forefathers were granted permit holders of the vast area of the land to useful farming and pasturing’
Counsel said the the first defendant approached the plaintiffs in April 2021 and told them that he had acquired the land which is part of the grazing reserve,.
He alleged that apart from the 10,000 hecters , the defendant is now clearing additional 5,000 hecters , without conducting environmental impact assessment and commencement work on the said land by clearing , blocking cable routes, water points in the reserve and power activities which caused erosion, flooding and other environmental damages.
When the case was mentioned counsel to the the first defendants Saidu Muhammad Tudun Wada filed a preliminary objection and asked the court to dismiss the suit in its entirety for want of jurisdiction.
Wada said no court of law has the jurisdiction pursuant to 1999 constitution as amended or the land use act 2004 to inquire to the rightfulness and legitimacy of allotment of land may by the executive governor of a state in Nigeria in the exercise of their exclusive powers including the governor of Bauchi State.
He said the Plaintiffs do.not have any existing personal right over the 10,000 hecters of land situated in Udubo Gamawa local Government Area, because they are not tenants ,just like any other herder has a permit to graze on the said land and the suit is not justifiable because it didn’t disclose a valid cause of action against the first defendants.
Counsel said Tiamin rice paid the Federal Ministry of environment the dum of N275,000 fees cost for interalia workshop and field data gathering in respect of the environmental impact assessment, and the company also paid additional N211,000 as assessment fee to the same Ministry and the Tiamin rice carried out all the necessary legal steps for the commencement of the land mark and expansive Rice Irrigation Project.
He argued that the Tiamin rice is the first large scale industrial and mechanised farming expedition carried out in Bauchi State and that same will produce job yo 100,000 person including farmers, mill workers and professionals, and its activities will not affect the herd activities in Bauchi State, and the permit given to herders yo graze their cattle is not tantamount to ownership of the said land.
When the case was mentioned the Presiding Judge Justice Rabi Talatu Umar adjourned the suit to 15th February 2022 for continues hearing.