At a rubber plantation in Liberia, history repeats in a fight over land 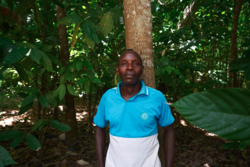 Tanoh Jallah, a resident of one of the towns in the IFC complaint, said all the good farmland was taken by Salala. (Photo: Ashoka Mukpo/Mongabay)
Mongabay | 17 January 2023


At a rubber plantation in Liberia, history repeats in a fight over land
by Ashoka Mukpo

In a small room at a safe house owned by a human rights group in rural Liberia, away from prying eyes and passing ears, Decontee explains why she quit her job on the Salala plantation. It was hard work, setting out at 5:30 in the morning every day to trek through the rows of tall rubber trees, stopping at each one to collect milky sap that oozed from their trunks into small plastic cups. But her job with the Salala Rubber Corporation paid — not much, just $15 a month, but enough to feed her two young children and elderly father.
Some days, instead of carrying her full bucket of latex the long way back to the weighing area at the end of her shift, she’d take a short cut by swimming across a river that cut through the plantation. It was scary; in the rainy season the current was fast and the water deep, but it was better than being late for the day’s rubber weigh-in.
One payday, her supervisor made a proposal. If she wanted, he said, he could give her a raise, adding an extra $5 a month onto her salary. But there was a catch. She had to visit the “green building” with him first.
Decontee and all the other women working at Salala knew exactly what the “green building” was. It was a term for the quiet parts of the plantation where managers could have sex with them without being caught. Frightened but also angry, she said no. (To protect her identity, Mongabay is not using Decontee’s real name).
“I said to [him] that I would rather go sit and suffer with my pa instead of sleeping with you to add five dollars to my salary,” she told Mongabay. Because of that he went against me totally.”
Decontee’s supervisor didn’t take the rejection well. After her refusal, he began treating her coldly at work, and when it was time to dole out her pay he often gave her less than she was owed. Sometimes he just didn’t pay her at all. Growing increasingly desperate, she said she brought what was happening to a senior manager at Salala.
“I got vexed and reported to the overall boss in management about him wanting to sleep with me, but he said he had nothing to say about it. He told me to take the complaint to the law,” she said.
It wasn’t realistic or helpful advice. She’d be going up against a company manager in a district where Salala was a powerful force, and she worried that she’d become the subject of town gossip in the process. More importantly, she didn’t have the money to win in a notoriously unfair legal system. So instead, she quit.
“It’s a slavery job, and when it’s time to pay me, you [harass me]? I decided to turn the tub over and said I didn’t want to go to work again. Up to now I have still not received my money,” she said.

The CAO, like the Roundtable on Sustainable Palm Oil, the Forest Stewardship Council, the Equator Principles, and any one of a dozen other sustainability standards for development projects are all rooted in a simple idea: with the right rules in place, global commodity production can be a win-win for everyone. Consumers in rich countries can buy products free from guilt, local communities can benefit from foreign investment without being pushed around or marginalized, and corporations can still turn a healthy profit.
In the last few years, though, nearly every single one of these standards has either failed or been widely circumvented by companies they were designed to constrain. Their defenders say that they’re better than nothing; even if there’s not much the CAO can do about a complaint, for example, the fact that communities can make one at all is a step forward from earlier eras.
But in Liberia, where the Salala complaint is mirrored by similar petitions made from palm oil plantations, iron mines, and other extractive sites to the RSPO, OECD, and courts both near and far over the exploitation of the country’s natural resources, a more fundamental question is at play:
What if the reason why high-profile environmental rules and sustainability principles like the IFC’s are so frequently violated is because if they were to be rigorously applied, the projects they cover might simply cease to exist?
In Salala’s case, for example, fully implementing the principle of free, prior and informed consent — specifically mentioned in point 7 of the IFC’s performance standards, which covers Indigenous rights — could spell doom for the plantation.
Whether or not its expansions were legal under Liberian law, Salala does not appear to have requested, nor does it have, the consent of the communities that on the land before its arrival. The IFC’s performance standards look good on paper, but here at Salala’s plantation, it can be hard to imagine what might happen if they were strictly followed.
In the end, it may not be possible without drastic changes to Socfin’s operations.
“We have to rethink the investment model and how we conceive of the people who own the land,” Brownell said. “These are human beings, and they are the landlords.”
The CAO’s weak enforcement powers are symbolic of a truism that often applies to corporate sustainability rules: they are useful when they facilitate business, and much less so once they begin to hamper it.
On paper, such rules have been adopted by commodity producers and financial institutions across the world, telling a story of a new era where ugly histories of violence and dispossession have given way to a more just global economy. On the ground in places like Salala, though, that story starts to fall apart.
Here, under towering rubber trees that cast their shadows over desecrated gravesites, and in quiet clearings where vulnerable women exchange their bodies for low-wage jobs, an older, more familiar world remains.
“I can’t get tired,” Queta George said. “When I die, I’ll die with my rights. But we are suffering here.”