Q&A: Foreign ownership of US farmland with US Senator Chuck Grassley 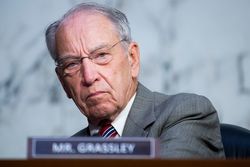 Q: What’s new with your efforts to boost transparency in foreign investment of farmland?
A: Last year, Sen. Tammy Baldwin of Wisconsin and I teamed up and introduced the Farmland Security Act to shine a spotlight on foreign investment of U.S. farmland. Our bill requires the USDA to create an interactive public database so that American citizens have access to foreign ownership disclosures reported to Congress via the USDA. This builds upon decades of my leadership to bring transparency to foreign ownership of U.S. farmland. As a then-member of the House of Representatives, I wrote the Agricultural Foreign Investment Disclosure Act enacted in 1978 that requires foreign nationals to report U.S. farm holdings to the USDA. At my county meetings, I hear growing concerns from Iowans that foreign investment in finite farmable acres will have a detrimental impact on prosperity and opportunity for family farms to be passed down from one generation to the next. Alarm bells are ringing around the countryside regarding the potential domino effect on economic development and way of life in Rural America. Keeping ownership of farmland close to home helps seed the local economy instead of lining the pockets of investors overseas or on the coasts. Our rural communities and revenue base are dependent on a robust agriculture economy. America can’t afford to give away the farm to foreign investment without compromising the lives and livelihoods of Americans in the Heartland and elsewhere. Nearly half of U.S. farmland is owned by Americans age 65 and older. Studies say nearly 100 million of these acres are expected to change ownership in the next decade. That raises a red flag for Congress to act now. Without a doubt, foreign ownership of U.S. farmland poses a consequential risk to food security. And food security is national security. Although I didn’t support the bloated price tag of the omnibus package Congress approved in December, I’m glad to report my bipartisan Farmland Security Act was included in the bill signed into law on Dec. 29. I’ll be keeping close tabs on the USDA during this session of Congress to ensure the law is implemented as Congress intended. As the U.S. Secretary of Agriculture, former Iowa Governor Tom Vilsack is in an influential position to do just that. As work begins on the new Farm Bill, I’ll also continue my efforts to put more teeth into the laws governing foreign ownership of farmland and work to ensure enforcement of the laws on the books secures compliance with the spirit and the letter of the law.
Q: What about your legislation to stop subsidizing foreign investment of American farmland?
A: I plan to reintroduce my bipartisan bill that bans the federal government from allowing foreign individuals to obtain credit and financial services through the Farm Credit System. The chairman of the Senate Banking Committee, Sen. Sherrod Brown of Ohio and I wrote the Farm Credit for Americans Act to prevent the Farm Credit Administration from underwriting foreign buyers seeking to purchase U.S. farmland. It would amend the 1971 Farm Credit Act to ensure foreign nationals can’t obtain financing through federal government-backed financial institutions to purchase American farmland. Young and beginning farmers here at home should not be squeezed out or compete with foreign investors subsidized by the American taxpayer, especially those backed by unfriendly regimes, such as the Communist Party of China. According to the USDA, foreign ownership of U.S. farm acres increased 60 percent between 2009 and 2019. Increasingly, young and beginning farmers are competing with institutional investors, such as pension funds, endowments and even professional athletes who are diversifying their financial portfolios with prime farmland. When lawmakers rewrite the new Farm Bill, I’ll push for reforms to Conservation Reserve Program (CRP) payments so they don’t distort the marketplace by driving up cash rent and boosting the cost of food production and land prices. This makes it more difficult for new farmers to buy farmland. As one of only two crop farmers in the U.S. Senate, I’m proud to serve as a watchdog for American agriculture. During this Congress, I’ll keep the federal bureaucracy on a tight leash and keep a close eye on foreign ownership of U.S. farmland. Transparency brings accountability. America can’t shut the barn door if the horse has already bolted.