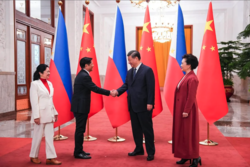 by Catherine Talavera
MANILA, Philippines — The Philippines is encouraging Chinese agribusiness firms to consider the country as an investment destination, highlighting its agricultural and labor assets.
Trade Secretary Alfredo Pascual made the pitch to Chinese investors during the roundtable meeting (RTM) on agribusiness during President Marcos’ presidential visit to China.
“As an agriculture-based manufacturing hub, the Philippines has a large domestic market of more than 110 million Filipinos. Our country’s rising middle-income class drives consumption,”Pascual said, citing that private consumption comprised over 70 percent of Philippines’ GDP in 2021.
Pascual also noted that the Philippines has a large working-age population and a growing pool of skilled workforce.
“Clearly, the Philippines is a highly promising production base for agribusiness. Thus, we invite you to consider the Philippines as an investment destination for plantations and processing facilities,”Pascual said.
The roundtable meeting provided an overview of the Philippines’ agribusiness sector and facilitated the sharing of the country’s major interests in establishing cooperation with China and maximizing the potential of the bilateral agricultural cooperation between the two countries, especially in areas such as agri trade and agribusiness investments, according to the DTI.
The meeting covered three key sections particularly trade, investments and agricultural inputs.
The DTI said the Philippine delegation pushed for an increase in the number of Philippine fresh produce with access to the Chinese market and confirmed that the market for durian fruit is now open to Philippine exporters and Chinese importers.
“Following the signing of the protocol on market access for Philippine Durian to China, participating companies conveyed purchase intentions for Philippine fruits of as much as $2.09 billion,” the DTI said.
Moreover, it said a total of $1.72 billion worth of investment pledges was gathered in areas such as durian production, processing and marketing, coconut and other food processing, as well as on alternative green technology for animal feeds, and other agricultural products.
The meeting was led by the President and was attended by former president Gloria Macapagal Arroyo, House Speaker Ferdinand Martin Romualdez, Sen. Imee Marcos, other members of the Cabinet, and Chinese companies engaged in agribusiness.
DTI, in collaboration with other government agencies and key stakeholders, said it remains committed to transforming agricultural farming into a thriving agribusiness-driven sector through science, technology, and innovation.
“This can contribute not only to diversify and increase the value of agricultural inputs but also to attain inclusive growth and rural development,”the agency said.