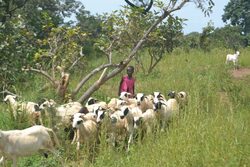 A young Mbororo shepherd from the Ardo Fougue family herds a flock of sheep on the land reserve (Photo: Yannick Kenné)
Mongabay | 1 December 2022


TIBATI, Cameroon – In Mbanti-Mbang village, Joseph Adamou and his family are living in fear. Living in the Tibati district located nearly 1,400 kilometres (870 miles) north of Cameroon’s capital Yaoundé, they are afraid of being removed from their farms that became part of the state land reserve six years ago.
At the end of October, the head of the Gbaya family, one of the six Indigenous ethnic groups living in the district of 72,000 people, was informed that the Cameroonian company Tawfiq Agro Industry would be setting up an agro-industrial facility. Gbaya, 60, and his family could lose access to the ten hectares (24 acres) of arable land they have been farming and using for trade for more than 20 years.


Last May, the Cameroonian government decided to allocate 95,000 hectares (over 234,000 acres) of land – three times the size of Cameroon’s capital Yaoundé – to the company Tawfiq Agro Industry, to develop an agro-industrial facility aimed at reducing expensive Western food imports. The price of imported food has increased this past year. According to Tawfiq Agro Industry, it aims to contribute to the development of local industry.
This Djerem village is home to a community of nomadic people who depend mainly on cattle breeding for their livelihood. Tensions are high among the Ardo Fougue family, whose leader is fearful of the project’s impact. This tall slim man of 70 and his family live on one of the land reserve’s mountains. They tend animals, which they make most of their income from.
“Everyone in the village is worried. When this company arrives, what are we going to do with our animals (cows, sheep and goats)? asks Ardo Fougue anxiously. “The land here is suited for animal breeding. If we have to leave, where will we go? Will our animals be able to live off the other land, with the same conditions as here?”
After 26 years here, he and his family are now under threat of being evicted, and do not know where their next home will be.

The Mbororo nomadic shepherds do not mix with other ethnic groups in Cameroon due to underlying agro-pastoral conflicts, and so mainly live in Adamaoua, eastern and northwestern Cameroon. They represent just 10% of the Cameroonian population so to amplify their voices, they established the Mbororo Social and Cultural Development Association (MBOSCUDA) in the 90s to represent their interests. Several members of this association, originally from Tibati, are opposed to this agro-industrial project.


Disconnection between the local bourgeoisie and communities
In August, communities making up the Collective for the Defense, Development and Safeguarding of the Interests of the Department of Djerem (CODDESID) sent a petition to Cameroonian President Paul Biya, to protest against the decision made last May by the Ministry of Estates, Land Registry and Land Affairs. Tawfiq Agro Industry was given a long lease agreement for the 95,000 hectares of land.
According to Ahmadou Abdoullahi, president of the Djerem collective, “this project is not beneficial. The way this deal was approached was not right. Deals were made with our district’s elites in Yaoundé. Then, our elites want to convince us to drop it just because it is state-owned land. Ninety-five thousand is too much to lose!”
The local representative criticizes the company’s unilateral approach in acquiring these lands.


The company began by going straight to the top and consulting with the area’s elite at the Association of Djerem Nationals (ARD), during their February meeting in Yaoundé, a thousand miles from the project site.
The Association is doing the opposite of what is in the community’s interest by approving the construction of the agro-industrial facility, says Abdoullahi.
The elite see it as an opportunity and real catalyst for the transformation of the local economy.
According to a statement from their general secretary Mohaman Mourtalla, “when Tawfiq presented this project in an economic context, we said to ourselves that instead of leaving this space unused, we must support the company if it meets its obligations of creating jobs and increasing the availability of food for our people.”
For its Tibati agro-industrial project, Tawfiq plans to invest $153 million (100 billion CFA francs) over a period of 10 years, which should generate 7,500 direct and 15,000 indirect jobs. Tawfiq’s long-term objective is to contribute to the development of local industry and to align with the import-substitution policy implemented by the Cameroonian government in 2021, which aims to considerably reduce food imports.


A lot of resources and a lot of promises
The Tibati local economy is based on agriculture, livestock breeding, and small-scale fishing, due to the area’s lake. Lake Mbakaou was renowned for its large local fish production in 2021. The town has important natural resources which may be targeted for illegal exploitation after the agro-industrial project’s arrival, a cause for concern for local communities, explains Ahmadou Ahidjo, Tibati town councillor.
“Our lakes are full of fish, we have oxen, we have bauxite, we have sapphire, we have gold, we have diamonds…, our savannah is rich in biodiversity. That’s why the state set up the animal husbandry park (which has been spared by the project),” he says.
“Knowing that we have these resources, you can’t help but be suspicious when you are told that someone wants to lease this land. Whether it’s unfounded or not, many people here are skeptical.”


The Tawfiq company has also not yet established an environmental and social management plan for the project which guarantee that local communities will be protected. It is still in the environmental and social impact study phase, which is being carried out by Cameroonian company Glonar LLC.
It has already undertaken work in the field, in accordance with Decree No. 76/167 laying out the terms and conditions for managing the private domain of the State, who governs the long lease. This “is granted for a period of between 18 and 99 years, subject to a resolutive condition of development within a specified period”, specifies article 21 of the decree.
Tawfiq is therefore bound by a certain number of obligations before signing the contract, according to the Ministry of Estates, Land Registry and Land Affairs: “When spaces are given to third parties, in general, it is to promote economic activities. We grant long leases of limited durations that carry restrictions. If the beneficiaries do not comply with the terms of the regulations, the agreements are terminated.”
In this vein, Djerem spokesperson and State representative Ludovic Etienne Ngbwa affirms that measures will be taken to avoid conflict between the company and local communities.


Ngbwa told Mongabay that the government plans to reduce the amount of land granted to Tawfiq following the community backlash. However, at the moment, this is only according to Ngbwa’s and is not yet written down or legally binding.
The communities themselves have not yet received this news, and officially their lands are still included in the land granted to the Tawfiq company.
“We will build the agro-industrial facility more than 10 or 15 kilometers [6 to 10 miles] from the villages, so that their living space is preserved, and there is no interference between the company and the community. Taking into account the local community’s complaints, the project area is being scaled down to approximately 45,000 hectares (over 111,000 acres),” he said.
This approach tacitly implies a reduction in the land area previously considered and would spare the communities from having to relocate from the arable land. The issue of compensation would then be swept under the table.
Tawfiq Agro Industry, who?
In Tibati, the location of the company (created in 2016) is unknown. Even the people in Mbanti-Mbang do not know where the company is, despite the village witnessing the construction of a road in the middle of the savannah, leading to the facility’s construction site. Tawfiq Agro Industry headquarters have been in Yaoundé since 2019 (previously in Douala) after its transformation into a Limited Liability Company (SARL) and modification of its corporate purpose. This reform by notarial deed thus redefines the company activities as import-export, transport, services and agriculture in all its forms.
Tawfiq is considered in Tibati as a “no name” among the local agro-industries, having not yet proven itself in this sector.
This is a claim contested by its young manager, Habibou Abdoul Malik, who told Mongabay: “In 2016, when we went to Yoko [the largest municipality in Cameroon] to plant 50 hectares [123 acres] of cocoa trees, we were told that it was impossible because no company had ever done it before. The following year, we planted 250 hectares [617 hectares]. We also have a private ranch of 1,000 hectares [2.471 acres] in Ngaoundéré, where we grow cereals and raise livestock.”


The company shares are majority controlled by the Cameroonian businessman Aboubakar Al Fatih, who runs the timber company Bois du Cameroun (BOISCAM), and Cameroun Vert LLC (CAMVERT), which in 2020 acquired more than 60,000 hectares [148,263 acres] of land in southern Cameroon to develop an industrial oil palm plantation. Their activities have since been criticized by the American non-profit organization Greenpeace, who say they are contributing to deforestation.
Al Fatih is from Mayo-Banyo in Adamaoua and is a politically influential figure in the Cameroon Peoples Democratic Movement (RDPC), who have been in power in Cameroon for the last forty years.