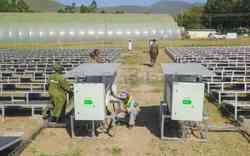 The Competition Authority of Kenya (CAK) has approved the sale of more than 100 hectares of Karuturi Flower Farm in Naivasha by Shalimar Flowers.

The competition watchdog said it had okayed the transaction that will see Rhea Holdings, the company that owns Karuturi, which is currently under receivership, sell land to Shalimar Flowers.

The acquisition is expected to inject life back into the farmlands that have been wasting away over the last eight years after the company was placed under receivership in 2014 after defaulting on a Sh1.8 billion loan from Stanbic Bank.

“The Competition Authority of Kenya has approved the proposed acquisition of the certain assets (land) of Rhea Holdings Ltd (under receivership) by Shalimar Flowers Kenya Ltd unconditionally,” said CAK in a statement yesterday. The transaction will see the acreage of Shalimar Flowers more than double.

The firm owns 94 hectares of flower farms across Nyandarua, Nakuru, and Kiambu counties.

This is set to rise to 194 hectares once the sale deal with Karuturi is concluded. It could also emerge as the largest flower farm in the country, accounting for five per cent of the land that is under flowers in Kenya, according to CAK analysis.

At the height of its operations, Karuturi flower farm produced over a million stems of roses a day, making it the largest producer in the country at the time.

With over 3,000 workers, the former Sher Agencies flower farm was at some point the lifeline of Oserian town in Naivasha.

But after the firm was placed under receivership, its farms have been wasting away, characterised by overgrown bushes and tattered greenhouses.

CAK said once the transaction will turn around the fortunes of the town, including jobs.