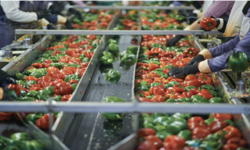 
AU Summit showcases Common African Agro-Parks
Godfrey Ivudria
The African Union Members States, the Regional Economic Communities, the United Nations (FAO, UNIDO, ECA), and Development Partners converged to discuss the implementation and financing modalities for the establishment of the Common African Agro-Parks (CAAPs)
The event took place on the margins of the ongoing AU Summit on Industrialization and Economic Diversification, in Niamey, Niger, under the theme: “The Common African Agro-Parks (CAAPs) as a vehicle for attracting private investments in establishing transboundary mega agro-industrial hubs on the continent”, within the framework of the Comprehensive African Agricultural Programme (CAADP) and the African Union (AU) Agenda 2063.
H.E. Amb. Josefa Sacko, the AUC Commissioner for Agriculture, Rural Development, Blue Economy, and Sustainable Environment (ARBE), stated that the creation of 5 large agro-industrial zones, one in each region of Africa, will serve as major agricultural development hubs for the continent.
The CAAPs was adopted by the Ministers of Agriculture in October 2019 to boost the African Continental Free Trade Area (AfCFTA). Amb. Sacko further reiterated that, “there is no more time to waste for more speeches.
It is rather time to stimulate private and public investment in the agro-industries; and unleash the existing strong potential of the African capital market, such as pension funds, sovereign wealth funds, and private equity funds of African business personalities.”
The AUC Commissioner, Economic Development, Trade, Tourism, Industry, and Minerals (ETTIM) Amb. Albert M. Muchanga emphasized that a five-year business plan for the Agricultural sector in Africa is imperative as he alluded to the sentiments of Amb. Sacko that food items should no longer be on the list of importations in Africa.
The strongest slant during the side event was, “no more talk! It is time for action! Africa can no longer rely on its neighbors to build its own granary!” positioned Dr. Yemi Akinbamijo, the Executive Director of the Forum for Agricultural Research in Africa.
“Therefore, the Common African Agro-Parks (CAAPs) Programme is a mega-initiative aimed at creating regional agro-industrial hubs implemented by the African Union.”
The CAAPs was conceptualized to respond to the continent’s demand for increasing the supply of locally produced agricultural goods, reversing projections on African food imports, value-added processing of agricultural products to boost intra-African trade and investment, tapping on the African food import market approximated at $50 billion per year.
The CAAPs also intend to provide over 8 million job opportunities within the crop and livestock value chains.
Mr. Mohamed Ali, the Director of Trade in Goods and Competition representing the Secretary General of the AfCFTA confirmed that the CAAPs must become the horse on which the AfCFTA must run.
CAAPS, a 37-million-dollar investment, has already received USD 0.5million USD in seed capital from Afreximbank. On the implementation of the cross-border agro parks in Zambia and Zimbabwe, Hon. Chipoka Mulenga, Minister of Commerce, Trade and Industry, Zambia, was very optimistic that the common Agro-industrial parks would provide food sustainability for Zambia and the continent.
In her affirmation, Hon. Dr. Sekai. I. Nzenza, Minister of Industry and Commerce, Zimbabwe, highlighted that collaboration between Zimbabwe and Zambia is an unforced natural phenomenon, flagging cultural and historical heritages shared by both nations.
The new era for Zambia – Zimbabwe collaborations has been restated as the CAAPs. As the former breadbasket of Southern Africa, Zimbabwe is looking to include CAAPs in its strategy for agricultural recovery.
It was also discussed that small-holder farmers should be at the center of the CAAPs initiative as commodities’ quality, quantity, and consistency will inform final production.
Hon. Mudrik Ramadhan Soroga, minister of Trade, Investment, and Industrialization in Zanzibar, affirmed that the young generation that is high-tech savvy would take the mantle and move the talk to the action!
On the other hand, the private sector, represented by Madam Emma Kawawa, CEO of Tanzania Women CEOs roundtable, confirmed that SME banking would go a long way to support growers and other logistical enterprises.
Following the reading of Declaration of the African Union Stakeholders on Mobilizing Partnerships for Implementing the CAAPs, H.E. Francois Kanimba, the Commissioner for the Common Market, Economic, Monetary and Financial Affairs of Economic Community